When the thunder and rain woke me up at something-to-four this morning, I wasn't sure it was gonna happen, but the skies were clear enough, and the roads were dry enough, for quite a number of club members to come out for the Princeton Freewheelers Bike Club Spring Fling, an event where we have rides for all paces, a free lunch, and awards for the leaders from last year (among other things). The Excellent Wife (TEW) and I make a date of it; she rides at her pace and I ride at mine, and then we have lunch together and hang out with old friends and new acquaintances.

Carol J had been holding my new club jersey; I rode down with the jersey I wore last week in the rain and mud (it did not survive; it's been demoted to muddy-day wear), and changed out of that one into the club jersey. 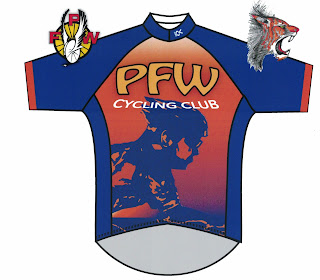 I went out with sixteen eighteen twenty twenty-six (the numbers kept changing) on a B ride that Dave H led (that ride page includes my eight-or-nine miles from home and back). Some people don't like the all-paces rides; the rides always include people who don't ride together and don't know one another's styles (and there IS sometimes some dangerous and stupid riding). This group, as far as I could see, was well-behaved, and I had fun today. I swept for Dave, and I'll do it again any time: he stopped frequently to make sure we were all together, and kept me posted on where he was planning to go. We didn't lose anybody except one who decided on her own to leave when she was near home. (We're not gonna talk about the young lady who let me pull her in a sprint, until my lungs were about to burst. She was grinnin' SO wide in my mirror, I didn't have the heart to stop, until I almost didn't have any lungs, either. We're not gonna talk about that.)

And OF COURSE I got pictures, both too many and not enough. Go check out my album on Photobucket.
Posted by Plain_Jim at 4:29 PM