memorial day all paces, with link to photo album 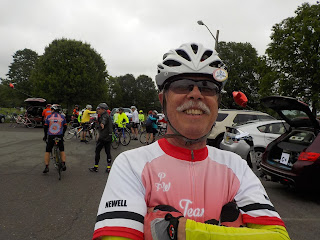 How could I not lead off with that nearly-perfect picture of Newell?

In an effort to stay married to The Excellent Wife (TEW), I've been trying to lead rides at her pace on the All-Paces rides, so that we get a date credit, even though we're on our bikes (it's complicated, but dates don't always count as dates if there are bikes involved). At the Spring Fling,TEW was enough under-the-weather that she couldn't come, and we had hoped she'd be up to a Low-C+ pace by today. But she hasn't been riding much due to weather and other commitments, and then there was the threatened rain and other distractions. She almost didn't come today, but my persuasions were effective, and we came to do the ride.

We had three other takers: Esther, who'd ridden with me at the Spring Fling; Winter Larry, who really could have done a faster ride; and a newbie, Ani, not yet a club member, but who could have kept up with Larry (at least). At some points we were strung out over distance, but we all got to the stop together, and we all made it back, and TEW and I are still on speaking terms.

Neat tricks: first, I've popped for a paid membership at RideWithGPS, and one of the perks is that they will automatically create a pre-formatted cue sheet. I printed a few copies to hand out. Well, since they'll do that, I also printed out a few from the break at Roy's BACK to the start, in case anybody needed to turn around (easy-peasy; set up the route in reverse and save it...).

Ride page. The careful eye will note that the elevation on the ride page, even after correction, is more than 50% higher than expected elevation from the route-planning page. Hrmph.

But, of course, some of you are only here to get to the link to the picture album. I can't say I blame you.
Posted by Plain_Jim at 3:52 PM No comments:

Well, I don't think it was a death march ride for THEM.

A day or two ago, I was copied (along with others) on an email Tom H sent to Blake about a non-club ride he was planning to lead. After a few weekends with ugly weather and other commitments, I resolved to go, and I remember thinking a bit on the way down to the start about friendship, and getting invitations to stuff like this, and gratitude.

The only ones who were available and who responded were me and Jack H. 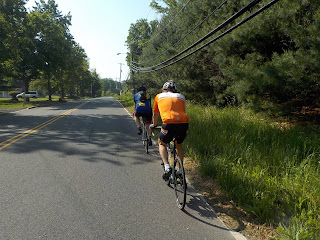 Tom's in front; Jack's in the orange.

Tom had a 50+ mile route from his house that he said was gonna be flat; his wife is recovering from knee surgery and Tom didn't want to be away all day. The distance was probably more than I should have taken on; it was a hot; humid day and I haven't the miles in my legs that I'd like. Within a few miles, I was a bit sick to my stomach; I pulled over in case emesis was imminent, but it wasn't (too bad; it might have helped).

The guys were waiting when I came around a curve. I told them about how I felt, and we agreed to continue, even if I was going to hold them back a bit. I thought some more about the nature of friendship.

We had a stop at a nondescript convenience store in Farmingdale (where Tom customarily stops on his rides to Belmar). Some Gatorade helped the agita to pass. But they didn't have a usable toilet, so we resolved to stop at the Dunkin Donuts in West Freehold.

We did, and I got another Gatorade. And we met this 79-year-old guy out with his bike and his dog. 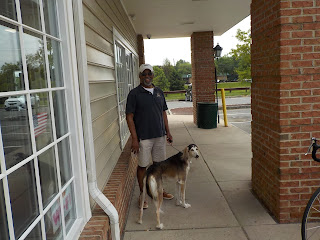 He expressed some interest in the club, and we told him about D-rides, Team Social Security, and our token octogenarians. I hope he comes out.

Back we came over the straightest safe route Tom could think of. At Etra Park, Tom saw a dog running loose into the park and decided to go after it. I got dizzy standing in the sun, and moved into the shade with Jack; after a short while, Tom gave up on the dog and we proceeded back to the start.

I was beat. This is at least the second ride this year where I've been beat at the end. Jack had added miles and had more to go, and, as far as I can tell, he may still be riding away. Tom said he wasn't in much better shape than I, and that everybody has bad days.

I'm hoping it was just a bad day. But I'm also grateful for friends who invite me, and who look out for me when I'm not at the top of my game.

Ride page.
Posted by Plain_Jim at 5:47 PM No comments: 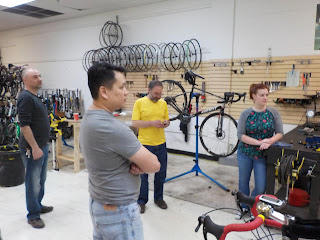 I wish they were lookin' at me with such rapt attention, but they were listening to Princeton Freewheeler Club President talk about the Trenton Bike Exchange. From left: Dmitri, Joe, Rick, and Melissa. Those red bars in the lower right are the current robes that my bike, the Yellow Maserati, is wearing

I'm running a pair of bike-maintenance classes at the Trenton Bike Exchange for the club. The first session was on changing your tube, and I found this was a more complicated task than I'd thought when I first tried to teach The Excellent Wife (TEW) how to do it. Those of us who've been riding for a while probalby minimize the difficulty, but it turns out that there are a number of steps just to getting a wheel off (and more for the rear than the front); even how to put the bike down engenders some discussion. Doing it at the exchange means that we can use stands and each person can have a bike to work on, which is much better than the "sit around and discuss" model that's prevalent in these classes (it's better, of course, if you bring your own bike, as Rick did, but I know that's not always possible). By the end, they'd all used tire levers and pumps, we'd killed a couple of CO2 cartridges just for the experience, and we did some quick talk about chains and cassettes.

There will be another on May 21; this time about brakes and shifters. Class is already subscribed, but half of the subscribers didn't appear. Next time, I'm gonna push for part-payment up front.

Ira and I talked about doing something like this at one of the all-paces rides. I thought that, if the weather were nice, we could do it instead of the ride (or maybe under the shelter at one of the picnics); Ira thought a short one after might work better (but we went almost 2 hours last night). What do you think?
Posted by Plain_Jim at 6:14 PM No comments:

Look, if I admit that there are cases to be made for limited government, manufacturing here in the United States, and limitations on immigration... can we please get a President who'll act like a grown-up?
Posted by Plain_Jim at 11:14 AM No comments:

Yeah, it's been a while since I posted anything. I did go on the Spring Fling last week and led a C ride; the plan was for The Excellent Wife (TEW) to come and I would lead a ride at her pace so we could make a date out of it, but she cane down sick the night before and couldn't. I did the ride anyway with four or five participants (depending on if you count Jeff & Patricia on the tandem as one or two), but the camera was dodgy, so I didn't get pictures, either. I had fun, and rode with some people I don't normally, but I couldn't see how I was going to get a blog post out of it.

Except I just did, didn't I? Ride page here.

So that was the Saturday. On the Sunday, I ran the mechanic station for the Franklin Food Bank Tour de Franklin, with an assortment of routes from one mile to a metric century. I didn't get many pics there, either. I worked on a number of bikes, mostly filling tires (how do these people ride on these low pressures?) and lubing chains, although there was a certain amount of brake and derailleur adjustment, some saddle-height consultation, and at the end, I did a major tune up on a guy's bike. He and his co-rider had the idea that you shift to the big ring to go up hills. I pointed them towards hill-climbing orthodoxy. We also had a discussion of disk brakes, the essence of which was: if you have a bike you like with rim brakes, and you don't ride in wet or muddy conditions frequently... just get on that thing and ride it.

Retrogrouchy, right? Well, as I write this, I just turned 63 a few hours ago. I'm invoking my grumpy senior citizen privilege.

So yesterday, Tom H put in a ride out of the Park-&-Ride in Yardville for 50 miles with about 2500' of climb. I'm a member of Tom's Insane Bike Posse, and that sounded like a good idea; what sounded like too much was Laura OLPH's invitation to add 20 miles by riding to and from her house to the start, through Trenton and across the Calhoun St Bridge. Instead, Ricky and I drag-raced on I295 to the start, he in his Cooper and me in the Prius. Laura, Jack H, and Robert N rolled in, Peter G drove up, and Ken G rode in on his own route. 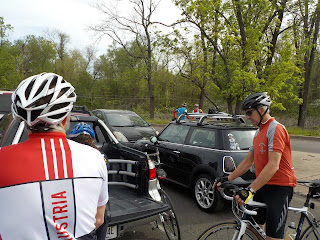 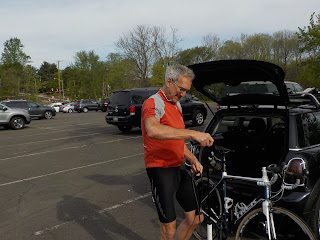 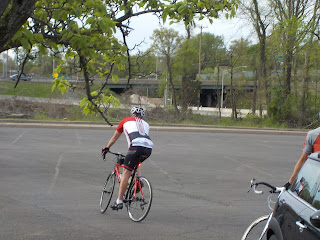 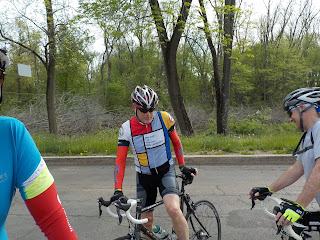 Because it was an early-season ride Tom did his ritual of the Holy Kickstand, sprinkled with the Holy Water of Brita; as a regular kickstand keeps the bike upright, so the Holy Kickstand is supposed to keep the bike and rider upright. It's a fun ritual, but it's also a reminder not to ride like a jerk. 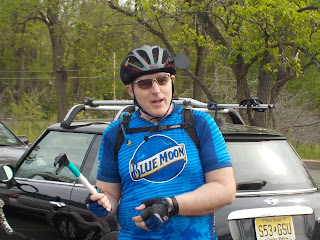 We mostly didn't ride like jerks. There were some moderately-demanding climbs, and some traffic, but it was mostly a fine hilly ride on a gorgeous day. 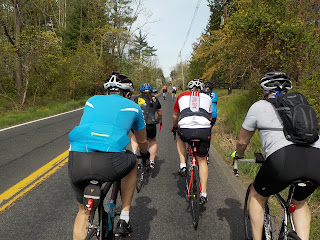 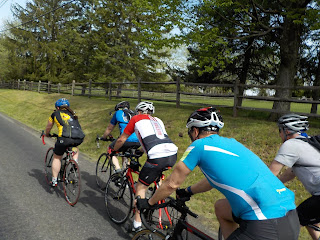 We came down the hill for the break at Carversville, and saw that Fleecydale, which I remember having been under construction apparently since the Carter administration, is open again. The Carversville store is neat. 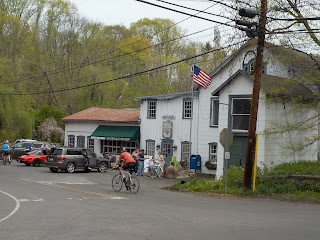 Everybody else apparently thinks so, too; there were a LOT of riders there. 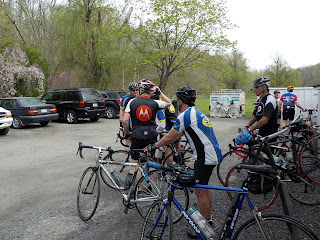 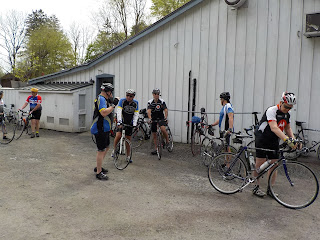 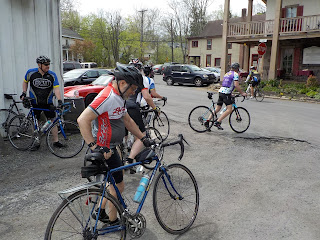 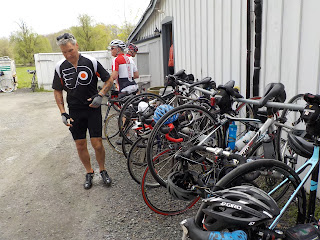 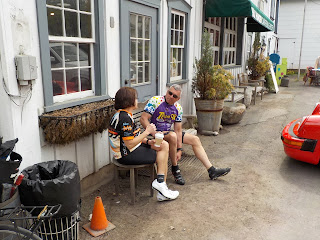 Finally the bike rack cleared out and we could park! 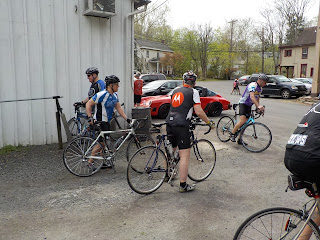 I got to talking about how I haven't given the bike a good cleaning since fall, and discussion led to the kinds of grime that builds up in various places. When you ride in wet weather, there are often a few worm bodies that get caught by the rear brake caliper. They tend to dry off and stick. "Worm jerky," Laura called it.

I thought I saw Bob N turn green as he quickly removed the detritus from his own rear brake.

Then back. Tom had scored most of the hills in the first, say, 60% of the ride, but there was his covered bridge (are you ALLOWED to ride in this area without crossing a covered bridge?). 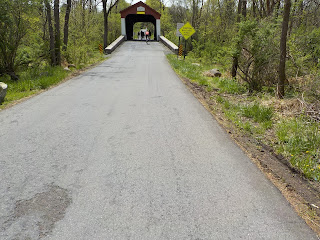 Now, covered bridges are frequently over streams; streams are at the bottom of hills; so on the other side of the covered bridge, there was, of course, a hill. Hrmph.