Ricky G (who ought to be canonized before the weather changes, although I think he has too much humility even to know why I'm suggesting it) saw my last blog post and texted that if I was gonna go on a ride, he'd be happy to come along. I haven't been on a bike except to roll down the driveway for about six weeks due to illness, and I'm not recovering quickly. Tom H or Laura OLPH were planning a 55-mile ride, and I knew I'd never finish that, so I texted Ricky about a 32-miler from home, and he agreed.

We did part of my usual route that goes up to 6 Mile/Blackwells Mills. I stopped on the bridge for pictures... 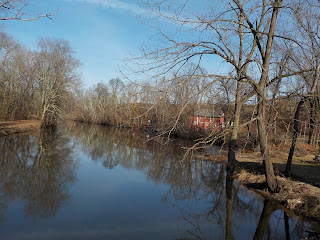 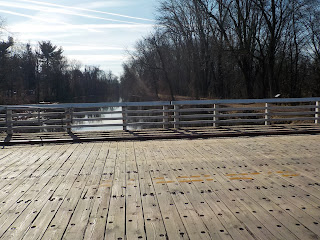 ... but mostly because I wanted to get one of Ricky: 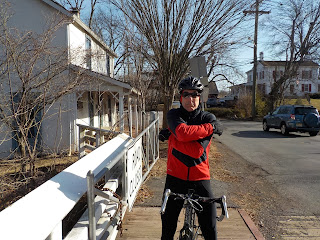 And off we went. It was a little colder than Ricky had planned for, but it was a great day. We got to chatting about what he did before he retired, and I learned about tools, and wheels coming off buses. (Don't worry; it doesn't much happen anymore, according to Ricky.)

Up in Hillsborough, I've passed this place a few times: 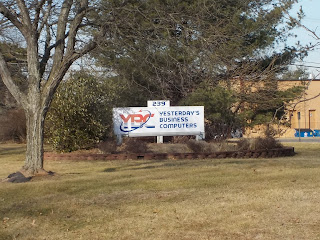 ... and I wanted to get a picture so that I can go look 'em up. After all, is there even a market for yesterday's business computers?

From Hillsborough, we go the full length of East Mountain Ave (where there is a demanding hill) and turn onto 601. And it was there I started to flag. We weren't talking much, but there was even less after that. Ricky kept up some conversation, perhaps to be sure I wasn't getting delirious, but I wasn't stellar or sparkling in my banter.

But we made it back without incident. I'm glad I went, but I'm also glad I didn't do any more. You can see on the ride page that I was in C+ range today, and I'm not going to go tomorrow even if weather allows. I've already had a nap, and early to bed is the likely watchword.

I'm an Old Man In Lycra. Here's hoping I can build up some strength and stamina so I can ride with the Slugs or Tom's Insane Bike Posse before the July 4th All-Paces.
Posted by Plain_Jim at 7:24 PM 1 comment:

on ailing and aging

So I went back and checked; I missed the last Tuesday at the Bike Exchange before they closed for the winter because of this illness that turned into bronchitis, which means I've had it over three weeks. I missed a few half-days from work, then last Friday and Monday; I tried to work Tuesday and couldn't make it through the day, and now I've got a doctor's excuse until next Monday.

I've been weak, dizzy, and headache-y. All I could manage was stupid internet; yesterday was the first day I could manage Netflix. I did the first four hours of "Medici: Masters of the Renaissance", suggested by a coworker. It's visually beautiful (Renaissance-y art and architecture! [Probably fake] Italian countryside! Even the beggars are handsome!), but don't take it to the bank for history, although I think they got the character of Brunelleschi about spot-on. (Also watched Coraline, which TEW says I saw on DVD with her, but I have no memory of it).

I'm feeling minimally better. I hope to actually get it together to do a chore or two, and I'd love to clean some of the road salt and grime that accumulated on the Yellow Maserati on its last ride. Yeah, yeah, titanium frame, won't suffer from the salt, but I remember a ride through the mud last summer that was the end of a bottom bracket, and I'd just as soon get the grime out of there. No hose, of course, but a sponge-and-bucket might do... and the fact that the outside weather is warm enough that I can actually get into the garage without a hat and gloves will help as well.

The being ill, though, has been a second nail in the coffin of my holding on to my youth. The past season's riding has confirmed that I'll never be a B+ rider again, although I can still do distances at a B pace. Now this illness, that has laid me SO low and taken SO long to pass, tells me again: I'm an old man; I can't do some of the things I used to do. It's sobering. Keillor has a litany somewhere or other that I'm not going to look up about "dark, depression, and that other 'D' down there in the basement"; I've been thinking about that other D and what its source is likely to be. With my history (this is only the most recent of a long history of respiratory ailments, including pneumonia as a child and many recurrences of bronchitis), a respiratory illness might be my ticket out.

I hope that's not soon. I do have some stuff upcoming (we're re-establishing connections with old friends, for example), and it would be nice to have a chance to spend up some of that retirement money I've been investing.

Here's hoping you're doing better than I, and that we'll both be healthy and active enough to see one another again soon. Live well, and do the next right thing.
Posted by Plain_Jim at 6:11 AM No comments:

So I've been ill now for over two weeks. Finally went to the doctor on Thursday, and found out it's bronchitis. That means it's viral, not bacterial, and THAT means antibiotics are gonna be ineffective (which is probably a good thing; back in the 90's I had a doc that probably overprescribed me Cipro and amoxicillin; I'm likely a walking nursery for medication-resistant bugs, even as we speak).

I've been ensconced in my front-room chair for days, doing stupid internet and dozing, alternating with sleeping in bed. The Excellent Wife (TEW) and I went out to do three chores yesterday, and the effort was so exhausting that I needed a nap. And then I needed another one. And then I slept 10 hours last night. (TEW is also recovering from bronchitis, but she's in better shape than I. Oh, to be young again, as she!)

I'm a little stir-crazy today, so I'll probably go out for an errand just to have something to do. But I know I'm not all better. I'm a little worried about being able to work a full day tomorrow.

Early reports are for rain next Saturday, and it's a god thing; I'd go out for a ride if there was one, and I'll probably still need the rest.

Here's hoping you're healthier than I.
Posted by Plain_Jim at 9:03 AM No comments: