end of the year

Between another activity that's frankly, none of your business, and being sick, and working like crazy, and not much riding, it's been a while since I posted.

I don't do New Year's resolutions (I don't do much on New Year's; as a person in addiction recovery, we refer to it a "amateur night", when all the amateurs go out and try to prove they can party). We'll be going to The Excellent Mother-In-Law's today; tomorrow, I'll work the holiday, which is a "gimme" for a person in recovery with no kids (see previous sentence).

Work will be tough, though; due to some less-than-ideal planning we had a large number of clients whose coverage ended and had to be renewed for 1/1/17. We issue a 366-day authorization, so they come up again on 1/2/18. I 'spect I'll be busy tomorrow.

The illness is probably flu; I've heard that the flu sibyls didn't guess right this year, and the variant that's going around is not one against which the protection was included in the vaccine cocktail I received. Still, the conventional wisdom is that the vaccine will mitigate the virulence of the attack, and that seems to be the case for me; there were only a couple of days on which I couldn't work, and one of those was a scheduled day off. I wake up coughing and have to drink water (the air is SO dry, and the humidifier keeps TEW awake), but that's about the worst of it.

TEW is also under the weather, so there's a small amount of disorder about the house. It makes her nuts, but it's so much better than my place was in my bachelor days that I don't even notice.

Here's wishing you a pleasant New Year's celebration. Get home safely, and don't be too stupid. Stay warm. Let's keep in touch, OK?
Posted by Plain_Jim at 9:20 AM No comments:

bike is wounded; healing to come

On that last ride, the Yellow Maserati fell over, and did something damaging to the right shifter; the brake lever disengaged. I fixed it enough to get home, bu it hasn't been right. I was examining it today, and the plastic housing that holds the fulcrum pin for the brake lever just came apart in two pieces. 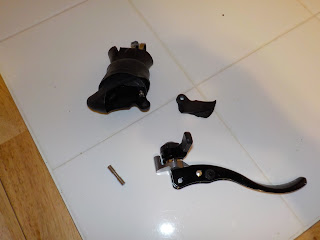 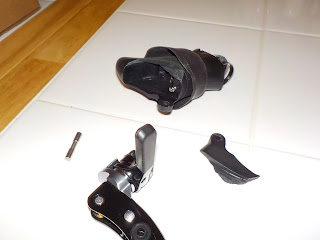 The pictures show the broken plastic pieces, the lever-shifter assembly, and the fulcrum pin. Boo-hoo.

Now, this is the set from those great Gevenalle shifters that I just love. They have a rebuild service for under $40. But wait...

I know from my researches that they are just rebuilding existing parts, and that sure looks to me like a Tektro lever. Well, there's a Tektro 520 that might fill the bill... and an examination of the lever assembly shows the number 520 molded into the inside of the lever. Hmm.

A SET (both sides) of the Tektro 520 levers is only about $27 online. And they're available from one of the online shops where I do a lot of business. I can just buy a new lever, pop out the fulcrum pin, replace the lever, and mount and go. Even expecting some problems, it should only be a couple hours work.

And working on the bike for a couple hours? Now THERE's a crisis.

The order's already in. The worst part will be waiting for the shipping at this time of year.
Posted by Plain_Jim at 8:37 AM 1 comment:

Yeah, it's been a minute since I posted anything, huh?

Well, between another activity that's none of your business, and no recent rides or bike-related news, and my inability to post anything political without devolving into grunts and profanity, there hasn't been much to say (although I'm very disappointed in the complete lack of critical thinking shown by some of my relatives in their political news gathering).

Enough of that. There WAS a ride today.Laura OLPH sent an email around to The Usual Suspects about her plans for a road ride on either Saturday of Sunday if weather permitted, and trail rides if they were better options. But Friday's snow precluded a ride yesterday (good thing; it turned out the auxiliary battery in The Excellent Wife [TEW]'s Prius needed an emergency change, so that was my chore yesterday).

Today, however, was better. I met Laura at her house at 9:30 (almost missed it; no lights were on and I was late-ish, and I thought she'd left without me), and we rode to the ride start at Twin Pines. Laura had neither a route, a distance, or a stop in mind; we thought we'd go and see what the roads were like. The one rule was not to go into the Sourlands where there was more likely to be ice on the roads. That implied a flatter ride, which was OK by me!

Eight of us started: Laura and I (of course), Joe M, Chris C, Andrew A, Ricky G, Dave H (does he even ride this side of route 1?), and Peter G, the first time I've seen him on a bike since knee surgery.

The day was cold and a bit damp, with cloudy skies. 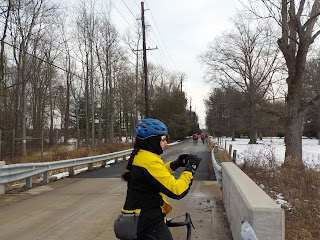 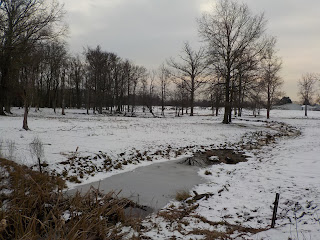 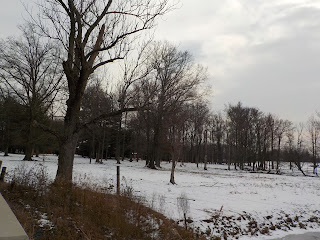 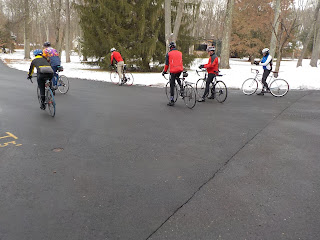 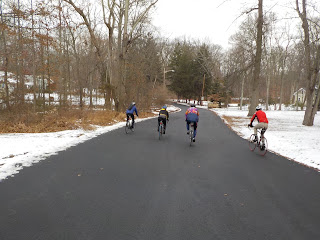 I don't remember where these were: 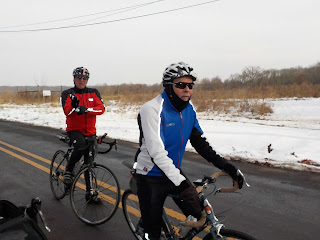 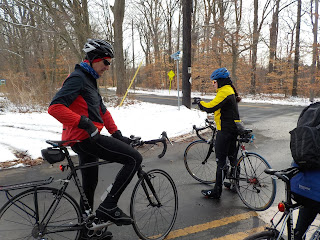 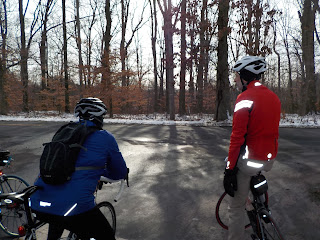 We did bobble about. I know at one point (it might have been Titus Mill at 31) we went left where Laura would have gone right 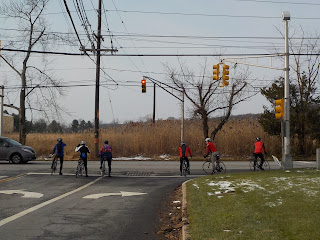 We wound up doing more hills than I would have thought. Some of the downhills were a bit concerning; I didn't see ice on the road, but it was cold enough that it was a possibility.

We stopped at Boro Bean in Hopewell, where Dave couldn't decide if he was better staying out or in; he finally ensconced himself in a corner easy chair. 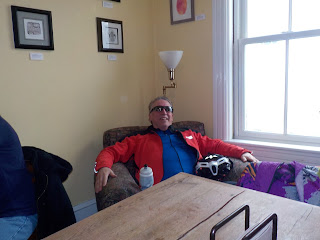 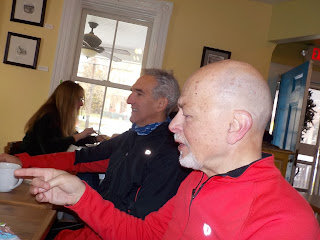 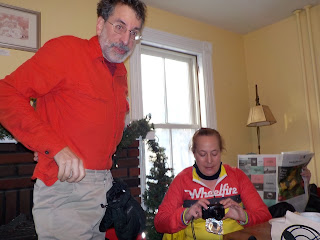 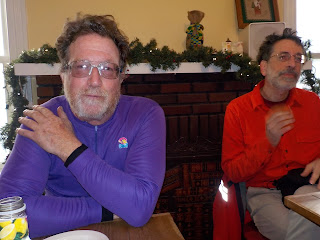 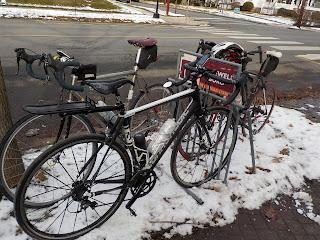 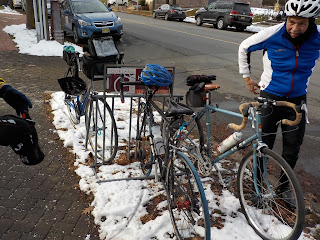 Below: Laura names her bikes after Muppet characters, and keeps a mascot on the seatbag. Which bike did she have today? 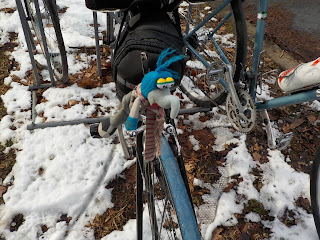 ...and Chris is not only unafraid of colorful tights; even his saddles don't settle for basic black. 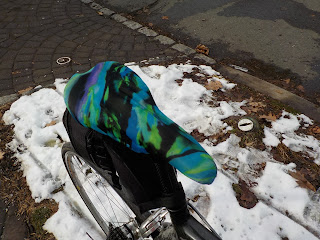 Somewhere along the way, Peter went off home, and Andrew did as we got into Pennington. The rest of us got back to Twin Pines. Ricky wanted extra miles, so he rode with us almost all the way back to Laura's before heading back to Twin Pines.

Ride page. Flat ride nothing'; near as makes no difference to 2000' of climb!