I've had my eye on the shifting/braking system from Gevenalle for years (at least two), and, having finally gotten fed up with the shifting problems I've had with my SRAM Rival setup since my accident in 2015, I grimaced, swallowed hard, and clicked the “submit” button on my order for the group. The parts came a couple of weeks ago, and I set 'em up on the Yellow Maserati over the past few days (sheesh, I was in no shape to RIDE anywhere after that benighted century with the Hill Slugs).

I haven't done any long rides with 'em yet, just neighborhood test rides, but early indications are: I like 'em.

You'll see in the picture below: the handlebar controls are basically the levers from downtube or bar-end shifters mounted outboard of the brake levers (as opposed to the shifting levers being inside the brake levers on virtually every other brifter system, including Campagnolo, Microshift, Shimano, and SRAM). The brake levers are from Tektro (the branding is still on the hoods), and I suspect the levers are Shimano, re-branded with the Gevenalle name. 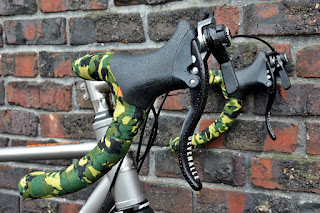 The set is marketed for cyclocross. It's hard to shift from the drops (the lower part of a drop handlebar), but I'm led to understand there's little of that in 'cross racing. And, since there's a LOT of mud and abuse in 'cross racing, they're built with durability in mind. (In fact, the associated derailleurs are labeled BURD: Blatantly Upgraded/Re-branded Derailleurs, and they're beefed-up versions of, I think, Microshift derailleurs: the chain cage on the front derailleur, for example, is steel rather than aluminum.)

What do I like?
One more thing I like: With the onset of the integrated brake/shift controls (I referred to 'em as “brifters” above), there's been a bit of a “black box” thing about bike controls; you really don't know what's going on in there. That's compounded by the electronic shifting systems. This setup is the complete opposite of that. Every part of this system is visible and easy to understand. You could show it to Leonardo da Vinci, and he'd say, “Oh, wow! Cool! Sure, I get it!” (or whatever the equivalent would be in Renaissance Italian).

Nonetheless, for a guy like me (old enough to collect Social Security, goes in for social riding rather than fast, does most of his own maintenance), they're just the ticket.
Posted by Plain_Jim at 8:03 AM