the garmin works better when you turn it on

When it's Memorial Day Weekend (for many, the start of the biking season), and the weather on the Sunday is as delightful as it was this morning, while the weather for Monday's All-Paces Ride is predicted to be rainy with possible thunderstorms...

... then it's likely that a LOT of people will be out on bikes today.

Jeff H had fourteen for his ride out of Cranbury, but one left before the ride start with a flat tire (like we wouldn't have offered a tube and waited until he got it together?), so thirteen of us left. At least one didn't want a picture posted, so you might not count eleven in the pictures below. On the other hand, we met about a gazillion riders from the Jersey Shore Touring Society (they appeared to be out in force; I suspect we came across several separate groups of their riders), and perhaps an equal number of apparently unaffiliated riders, so you might count many more. 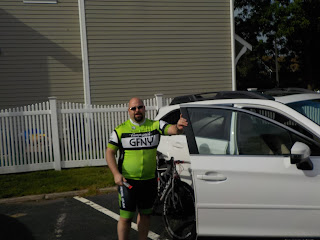 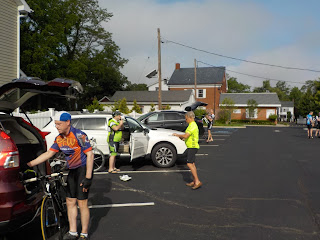 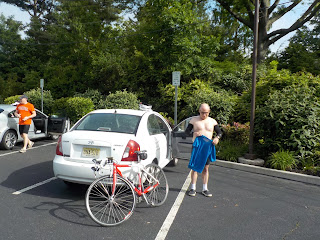 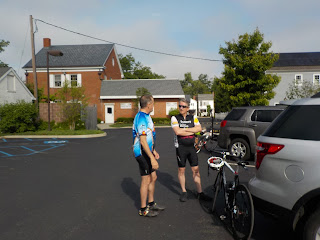 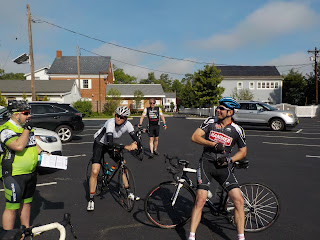 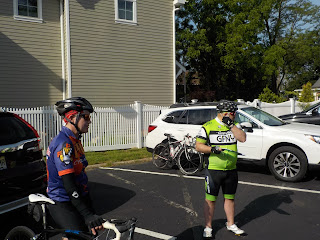 Now, I use the Garmin Touring. I haven't had anywhere near the trouble with mine that Laura OLPH has with hers (see her recent Facebook rant for more), but maybe I'm less demanding. However, I did learn today, if I had not known before, that it doesn't track your route if you don't push the start button... so this ride page misses the first, oh, eighteen miles of today's ride.

We stopped at Bagel Talk in (I think) Marlboro, where about every third person in Central Jersey stopped today, most of 'em on bicycles. 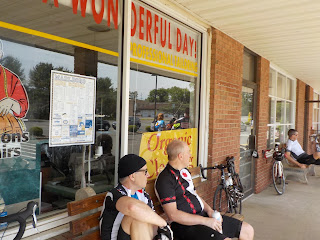 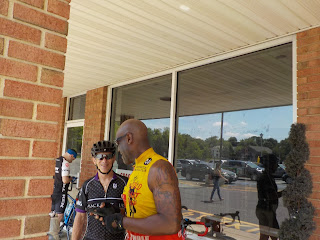 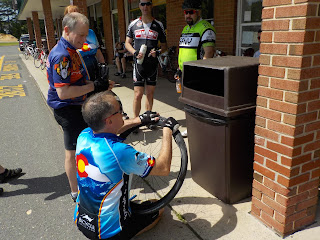 Above, Gary W changes a tire with only about 25% of the usual comment-committee offering advice and criticism (Q: How many Freewheelers does it take to change a tire? A: How many do you have?). Below, one of my fellows thought he needed to commemorate my scarfing down a cookie that was big enough to alter local gravitational effects. Look at what it's doing to my neck! 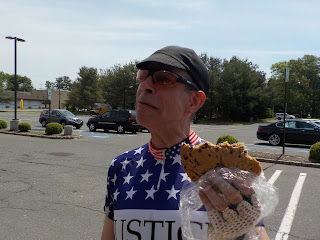 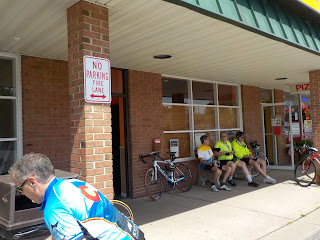 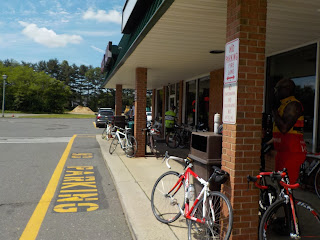 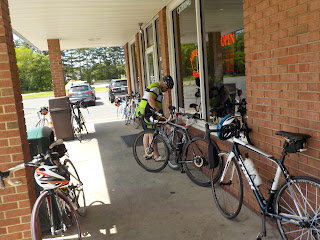 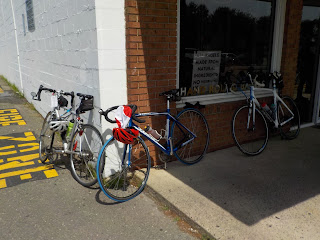 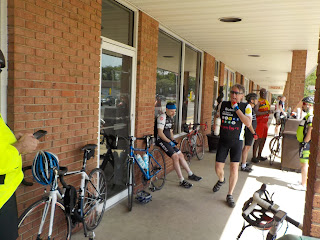 Some of us started to flag on the way back, and I went back to my usual sweeping duties.Still, my average at the end was 17.2, and I was among the last back to the lot.

Later, The Excellent Wife (TEW) and I went out for the Crustacean Celebration at the Stage Left Restaurant (there are worse things than lobster at an excellent restaurant), and wept into our tap water (neither of us imbibes) over the prospects for rain at tomorrow's scheduled All-Paces ride. I might have to do some chores, instead! Imagine!
Posted by Plain_Jim at 7:10 PM