on customizing your non-custom bike

Every so often in these posts, I've made reference to customizations on your bike. I'm surprised that more riders don't do more of them. Since both of my bikes were built from parts, they are, in essence, ALL custom (except that our idea of a “custom bike” usually includes a custom-built, fitted frame, which I did NOT do; the frame of the Yellow Maserati, the bike I take on most of my club rides, is from Habanero [home of the least-expensive titanium frames on the web] and the frame of the Krakow Monster, my hybrid, is a standard Surly Cross Check).

In (maybe) order of importance, or ease of installation, or maybe just the order in which I get to 'em, below find some of the customizations I think riders could adopt:

If you got your bike at a shop that offered any kind of a fitting service, you probably got a stem (the part that connects your bars to your steering tube) of a length that was fitted to you. This length may be ideal, or it may not. Some shops want to get you stretched out like a racer for maximum efficiency; others aim for a more upright position for comfort, because you can be TOO stretched out. I found the stem length on my first bike was too long, and one just a centimeter shorter allowed me to ride longer. When I built up my bikes, I looked for that length from the seat tube to the bars, and chose a stem length (and angle) to fit.

Saddles are easy to change, but the search for a comfortable saddle can be hard on your wallet... especially if, as I did, you fall for a saddle that subsequently gets discontinued (one of the guys I used to ride with said he'd heard, “If you find a saddle you like, buy ten of 'em”). I'm currently riding a Selle Anatomica on the Maserati; the Monster has the last of those discontinued saddles (although I've cast the eye of interest on the Serfas Var2). I've tried at least two others that didn't work. Ebay got me some of the money back, but... it's still an expensive pursuit. Nonetheless, it's worth finding the saddle you like if you plan to ride a lot.

There is a cult of Brooks, the members of which swear that there is a Brooks saddle for every backside. I don't think they're correct. First of all, most of the Brooks saddles are leather and need attention; second, they do require break-in; third; they are heavy (as saddles go; I'm about as far from a weight-weenie on bike stuff as you can get, but I know this is an issue for some). There may be a Brooks for you. I tried the cotton-and-rubber Cambium, and it was a memorably bad fit for me. The newer one with the hole may be better... but the Selle Anatomica works, and as long as I keep it from getting soaked, I expect to get a decade out of it.

Your shop probably sold you a set of pedals, shoes, and cleats. I've stuck with my Looks mostly out of inertia, but I know that riders who like Speedplays say that the “no wrong-side-up” feature, and the ability to walk on the cleats, is a hit for them. Pedals are easy to change (although the expense of pedals and cleats, and maybe shoes, can be dear). Consider if a pedal change might be in order.

Cassettes. That cluster of gears on your rear wheel. Oh, dear.

Racers like a cluster of gears with close tooth differences, so they can maintain a perfect cadence. But those of us who ride for recreation might want to choose a different set of gears; the larger the big gear, the easier it is to pedal. If you hate riding in the hills, it may be because your bike is not geared for it. If you have the 11x23 gear cluster, you might want to consider a change. I almost never use my smallest cog in the back (I have 11x28 now, and there's a 12x28 in the parts bin to replace it when it dies), but I have no shame about using that big one on the hills... and I can go up a hill pretty well. My hill climbing is partly my legs, and partly the hardware I have to climb with. (Note that a change of gears in the back might require a new rear derailleur to stretch over the larger gears.)  When I had a triple on my first bike, I had 53/46/32 on the front, but a 11x23 on the rear; the cog was inexpensive, as I remember, but I now think it was a foolish economy. (The Krakow Monster has 11x34. I can almost climb walls with it.)

Many bikes in the US are sold with a 53/39 set of front gears, which (again) is what racers use, mostly on the flats. “Road compacts” of 50/34 have become more common on recreational bikes; the Krakow Monster has one, as did the Yellow Maserati until about a year ago. I noticed on the Maserati that I was forever shifting from the largest cogs on the back wheel when I was on the big chainring, to the smallest cogs when I was on the small chainring. I swapped out that 50-tooth big ring for a 46, and now I can stay on it and shift in the back (although I find myself staying on the small ring much of the time now; Velo-Orange has a 46/30 that may pique my interest more as I get older and weaker).

Wheels. I build my own, because I found I like to. If you look at a bicycle wheel with the typical two- or three- cross pattern, you'll see that there are different amounts of space from the rim to where the spokes cross: a quarter of the spaces are short, half are medium, and a quarter have a long space from the rim to where the spokes cross. And on a wheel that's correctly built, the valve is always under one of the long spaces. I learned how to build wheels because I wanted to learn how they unerringly arranged to get the valve under one of the long spaces, and, along the way, I found I really like building wheels. I see many wheels on road bikes are built with few spokes, and with radial spoke patterns, both of which save weight (radial spokes are shorter). That's a great idea if you're under 180 lbs., which I no longer am. Now, if you're on a ride with a standard-built wheel and you break a spoke, you can probably pseudo-true it up enough to get home. Break that spoke on a bike with too few of 'em, and you'll have a much harder time. I overbuild my wheels for my weight: 28 spokes in front and 32 rear, just for that reason.

Two other things I did, which may prove that I'm completely out of my mind: first, my first bike was built up with a second set of brake controls up on the tops of the bars. I used 'em all the time, so much so that I built 'em into both the Yellow Maserati and the Krakow Monster, and when The Excellent Wife (TEW) saw her bike DIDN'T have 'em, nothing would do until I put 'em on. 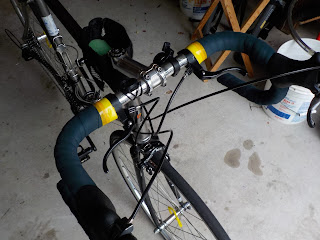 The brake housing is cut to either side of those controls; the cable goes straight through.

The other thing is that I changed the brake cabling so that the front brake is in the right hand. Sheldon Brown, the closest thing I've seen to a bicycle guru, did it that way. My right hand is stronger than my left, and the front brake does most of the stopping (in a stop, the front of the bike “digs in”, while the rear wheel rises and sometimes comes off the ground entirely. If the tire is not touching the ground, how much braking is that wheel doing?). Some riders fear that the stronger front brake will send riders over the bars; indeed, when motorcycles first went from front drum brakes to front disk brakes, the difference was so sharp that riders, accustomed to having to crush the brakes to stop, DID go over the bars with the new disks, and riders were cautioned to stay away from the front brake. But Jobst Brandt (if Sheldon Brown is the guru of bikes, Brandt is our chief engineer; also, extra credit to anyone who can tell me how to correctly pronounce his first name) holds that the “over the bars” phenomenon comes not from braking too hard, but from not using the arms to hold oneself in place (a hypothesis borne out in my crash two years ago; I've never come close to going over the bars in braking). The key problem with the reversing of the brake cabling is that it makes for an ugly cable routing setup at the head tube. This aesthetic is not to be ignored, but I think that the additional braking power is worth the ugly routing. (And I'll bet you, who didn't know what you were looking for, have never noticed it.) 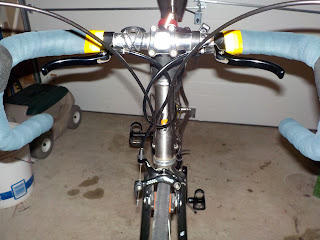 That confusion of cabling is neither the head of the Medusa nor the tentacles of the Kraken; it's just my controls. There IS a head badge decal in there, somewhere...
Posted by Plain_Jim at 12:03 PM