cranbury 40 with dave h, and i meet a reader of this blog

A month ago, on a weekend when my usual ride buddies weren't going out, I went to do a ride out of Cranbury. I used to do many rides from there, but I like riding in the hills, and Cranbury rides are flat. Nonetheless, I remember writing that I should go there more often. Tom H was doing a ride for which I don't think I have and appropriate bike, and Laura OLPH didn't have one listed, so at stupid-early-o'clock, I was in Cranbury,waiting for Dave H's ride.

(Dave H led the ride on which I swept at the Spring Fling. It would KILL me to have to admit it to him, but I was looking forward to riding with him again.)

As I always do when I go to Cranford, I see folks I don't often see, like Spence, one of the club octogenarians: 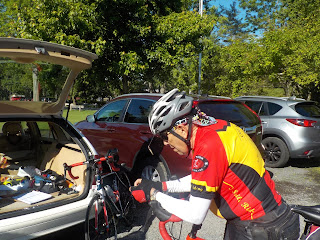 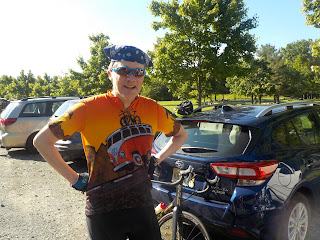 Above, Jud H, who was singing the praises of a new disc brake system; below, ride leader Dave H: 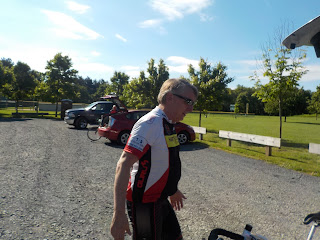 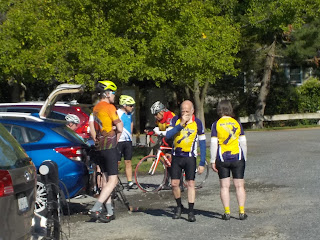 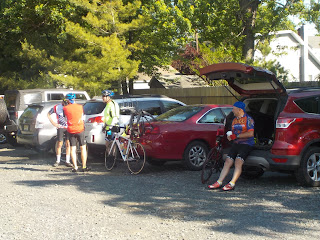 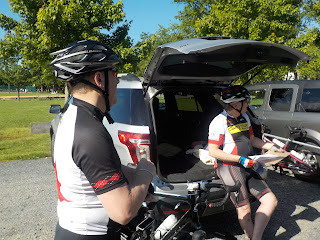 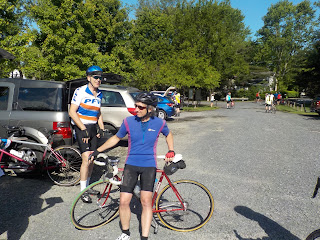 Above, Winter Larry (out on a Saturday?), and Eddie H. Waving at you in the picture below is Ralph, who is twelve days away from having ridden his bike every day for a year. 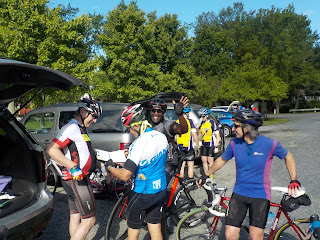 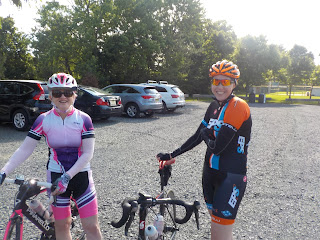 This was also the maiden voyage of the new Gevenalle controls. Club president Ira S and Eddie L had apparently both read my earlier post and asked about 'em.

The fact is, I like 'em. I had to do an adjustment; the spring on the rear derailleur is extra heavy-duty, and I had to tighten the setscrew on the lever at the stop, but the shifting is crisp, and the brakes engage quickly and definitively. But I've gotten ahead of myself.

Before the ride, I broke the prescription insert for my riding glasses; I had to ride with my regular glasses (I decided decent vision was more of a priority than looking cool in my shades). I've since broken out the backup (The Excellent Wife [TEW] said, "Of COURSE Jim has a backup...."), but it's probably time to seek out another set of glasses, since Serfas no longer makes the ones I like.

Dave planned a ride to Roy's in a counterclockwise direction. Prior to the ride, I overheard a rider I didn't know ask if Dave and a few of the others thought he could keep up with us; he got reassurances, and we left just after a huge C+ group left with Ira. There were a couple of hills at Back Bone Hill, and we went UP Clarksburg (which I don't think I've done), but this new rider did fine keeping up with us. We stopped at Roy's: 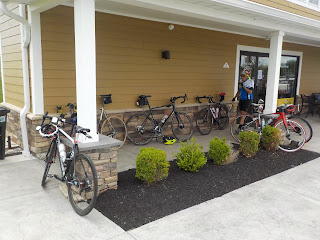 ... where the unnecessarily-apprehensive rider turned out to be Dov, below, who's been following my blog and liking my posts. I'm a sucker for a fan! 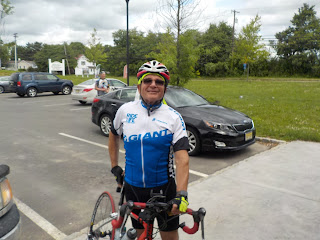 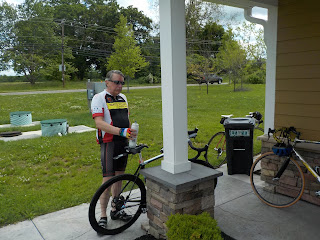 We weren't long at Roy's when Ira's ride came in. He told me they'd already done 52 miles and might make it to 80 by the end of the ride. He might not have been entirely honest. 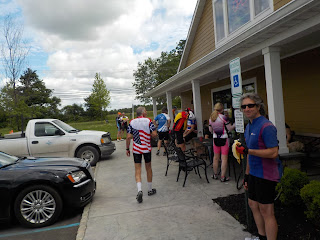 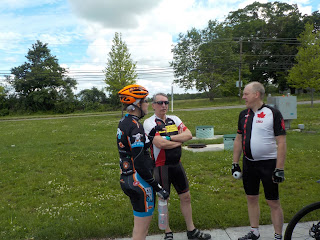 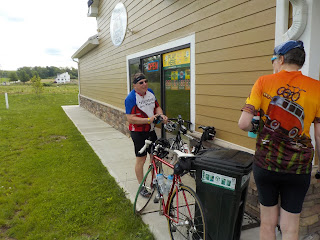 Above, Ira, no doubt impressing Jud with his prowess.

On the way back, one of our number hit the wall and started to lag. I've been through it, it's no fun. He was able to turn off and head for home before the rest of us got back to Cranbury.

Dov wanted the ride information at this link. (Hrmph! Like I don't ALWAYS post the ride links...)

I'm hoping for another ride tomorrow... but early indications are that the All-Paces on Monday will be a soggy affair, if it occurs at all. Alas.
Posted by Plain_Jim at 2:08 PM