fall picnic and weekend rides, and some (probably boring) introspection 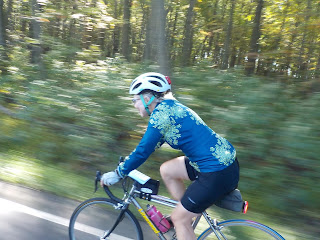 If you're looking for the pictures from the Fall Picnic, head on over to the photos & albums page of the PFW website.

As I do on the All Paces rides, it was my intention to do a ride that my wife could come on, so we could ride together. I got a group (at one point, it was eleven); we had one who dropped out of a large, unruly ride; another we picked up at the stop. We stopped once to change a tire (OF COURSE I got all professorial and had to teach everybody how to do it); at another point a rider fell because of the all-too-common failure-to-clip-out problem; another rider suggested that the pedal spring might be too tight. I loosened the offending spring, and the rider indicated being impressed with the improvement.

But the thing I'll remember from this ride is the disappointment of the riders in the back when the fast folks in the front kept taking off. And I was among the fast folks. While we did come in at a C+ pace, we were right at the top end of it - which was NOT what I had either advertised or intended. Hmm.


The next day, I led my Lo-B Ride from Blackwells Mills. I'm developing a following there; I had seven: Peter F, Dave H, Rama K, Laura OLPH, Luis C, and Rolf M. Mini B had signed up, but rode in to say she wasn't coming along, thinking it was more than she could do (although she may just have decided that when she saw the res of us). And on the way down Canal Road, we picked up Jerry F. 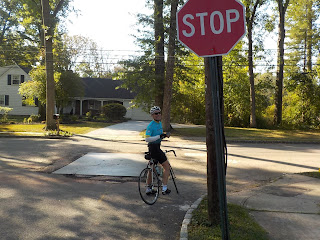 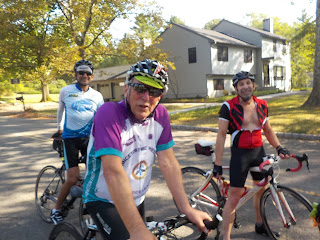 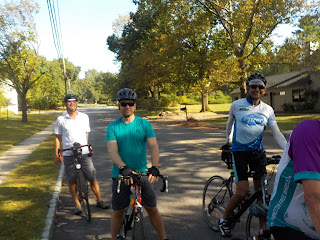 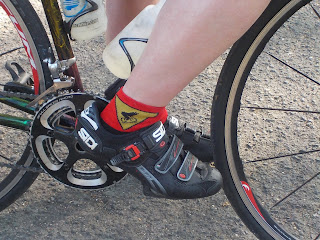 I had some GPS weirdness, so the ride page is divided into the first part (including my ride in from home, then to the bagel shop, then to the start), and the second part (including my ride home). It's a route to the Boro Bean in Hopewell that I've adjusted to avoid that climb up to Mount Rose. Laura thinks there are just as many, if not more, hills on this one, but if there are, they are spread out and less enervating. And besides, if you want to climb up to Mount Rose, go ahead; I won't stop you.

When we got to the Boro Bean, Rolf took a call and had to go; I wanted to document that he was really along: 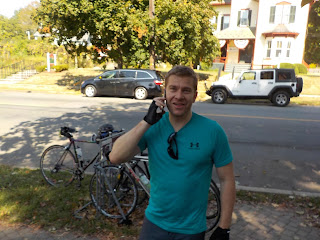 He was a good sport about it. And, of course, I got bike pics: 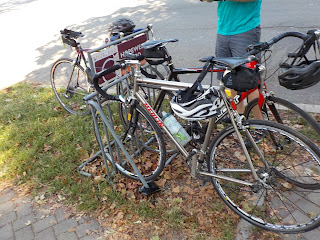 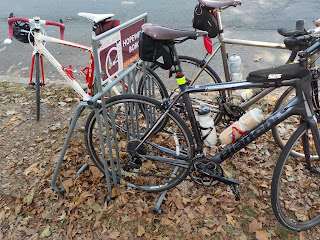 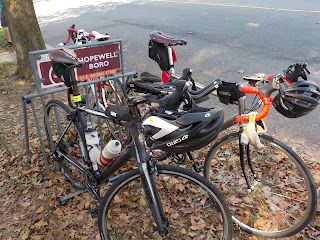 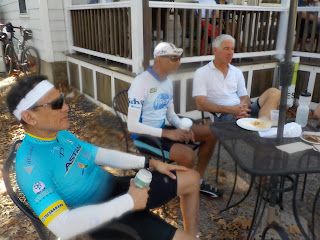 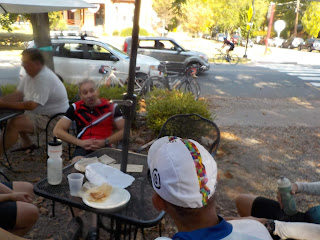 As we came back, one by one most of the others went off to ride home: Laura, David, then Luis, then Rama... until only Jerry, Peter, and I were riding back.

And Jerry remarked about the speed on the last bit of the ride.

Now, as I think about it, another rider has said that my rides have gotten faster and faster, as I've lost weight and gotten into shape. It was not my intention, but I've got to think about whether I really want that happening on my rides, and whether I want to be a part of it... and what (if anything) to do about it. If I'm honest, I'm a B rider on the flats, who can sometimes ride at a B+ pace for a certain amount of time.

I've discussed with The Excellent Wife (TEW), and the plan we've come up with for the all-paces rides is for me to lead a C ride, planning for the middle-high part of that range, so we can ride together. As for the other rides I lead: next week is the last Sunday of the month; I won't be able to lead, but Peter F might do in my stead. The following week will be the first of the month, but I'll lead my planned C+ pace ride that week. Edit: No, I won't; I'm working that day.


None of you probably ever look at the post labels in the cloud over there on the right, but I have one labeled "competitiveness". It's really about how I'm trying to reduce my competitive streak. Initially, it was because there was some concern that I'd do dangerous or stupid stuff on the bike if I were feeling too competitive. But now that I'm a leader (and, with 24 rides so far this year, I think I qualify), it's also about making sure all the folks on my rides who should be up to the pace and other demands, are safe and having fun. (That doesn't mean I think every rider should be welcome on every ride; we have an individual responsibility not to overreach our abilities - we put ourselves and others in danger when we do.) The club has plenty of rides for people who want to push themselves. I don't want my rides to be a place where I push others.
Posted by Plain_Jim at 5:20 PM