After a flurry of email correspondence this week, Tom H decided he'd lead a ride from the Mercer East lot today, and a few of us got invited. It turned out five of us showed up, all ride leaders except for me (and I sort-of qualify after doing a few D rides for the club, and social rides for the New Brunswick Bike Exchange). Somebody called it a "Master Class", I presume on the model of musical master classes; I liked it at the time, but the name doesn't quite fit.

But the five of us (Tom, Winter Larry, Chris C, Laura OLPH, and me) like one another and ride well together. We haven't ridden together frequently all as a group, but we have all ridden together, and we know what to expect from each other. There's a certain pleasure just in that comfort and confidence.

At the start at Mercer East, Laura and Chris were in their usual colors. I ride in bright colors to be seen, but I'm a somber sight in comparison. 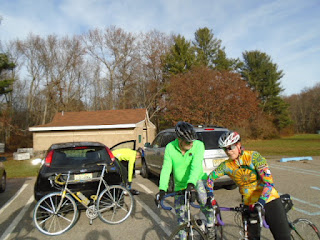 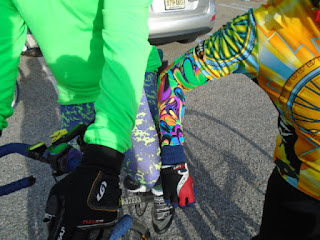 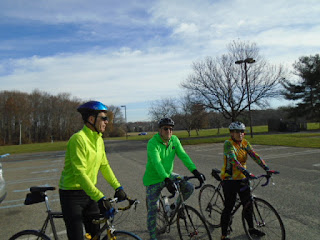 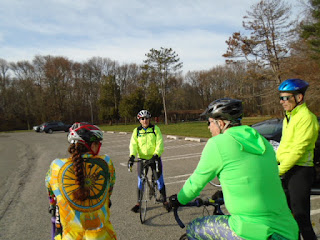 We did this route. Tom was making it up as he went. One of his recent posts was entitled "Stupid Is As Stupid Does", but the only thing stupid I could catch about this ride was eight crossings of interstate highways, including six of the NJ Turnpike, mostly in the last bit.

I was dressed for the damp cold that prevailed when I left the house, but the day warmed a lot, and I was shedding hat and gloves long before we got to the stop at New Egypt. 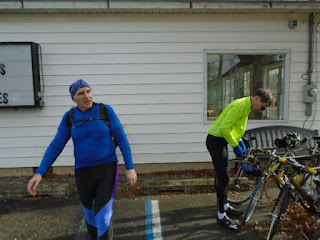 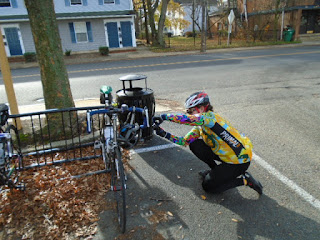 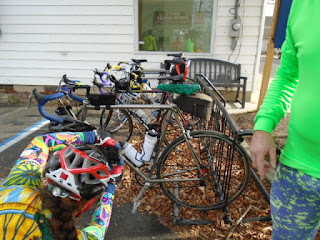 When Laura got down to take that bikes pic, she was amused by how much lower her saddle was than the others; she's got a picture on her blog post, but it's not as good as seeing it in person was ( I guess ya hadda be there...).

She was also complaining about an out-of-round section in her wheel, and how the mechanic fellow at the shop she uses said they didn't have the stand to fix it. I was outraged: pretty much every stand has that guide, and you can look at the list of favorite posts in the lower right for a link to the Sunlight truing stand, the inexpensive one I use, that has such a guide. (I think the mechanic dude just doesn't want the job, which I respect: it's  PITA, and he probably can't get enough money for it to make it worth his while.)

On the way back, we stopped at Walnford for pictures. 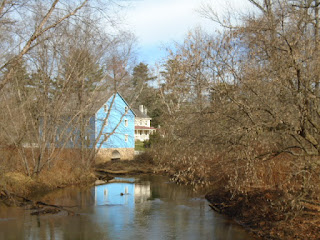 Before the ride, Chris gave me an old (I think) Suntour bottom bracket to use for my bike maintenance classes. It needs a bearing, but I'm not sure I could find such an old thing... but it's still a neat old assembly. I'm glad to have it. When the weather warms and I can get into the garage at night, I'll clean the grease off it.

It was a great day. After being nice to the in-laws yesterday (and eating way too much that didn't really agree with me [and what is this that suddenly there are things that I eat that don't agree with me?]), this ride was just the ticket.

I was reading another blog, where the writer always signs off with a pleasant little address to his readers; it's a custom I'm going to start to steal. So remember: keep the shiny side up and the rubber side down.
Posted by Plain_Jim at 7:31 PM