Laura OLPH moved her planned ride from Saturday, when it stormed in the morning, to Sunday, when it didn't. Her 70-mile planned route could be made into a 100-miler by leaving with her fro her house... but I've had way enough of that for a while (and I wanted to be back and cleaned up for Don Sprague's wake).

So after installing the new, correct bottom bracket (which was delivered just as the rains were letting up on Saturday; I managed a short shakedown ride in the afternoon), I showed up at the Reed Recreation are way too early. I tried the men's room door, which was locked. 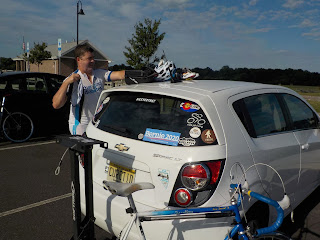 I rode the path to some shrubbery where I could pee in reasonable privacy, and when I got back, Jack and Tom were there (don't let the picture fool you; Jack had already ridden in from home). 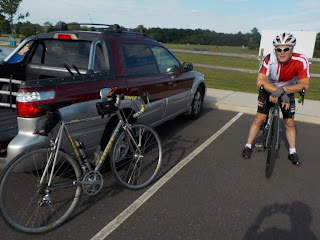 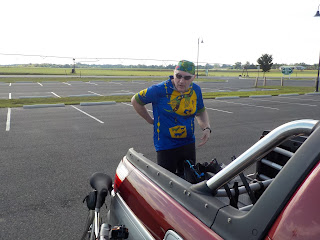 Tom went to try the men's room door, and it opened for him, and then it opened for me. Now I don't know if it was really locked, or if I'm just incredibly klutzy. There was some talk about a timer on the door, but it strains credulity less, as I so frequently say, to think I just haven't managed the technology of a door handle sufficiently well in 62 years on the planet.

Laura rolled in from home earlier than we would have expected... 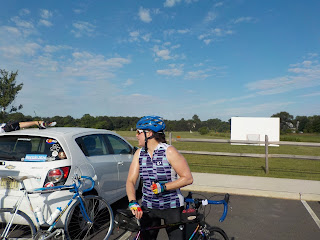 It was a great day. The ride was fairly flat; the wind wasn't obnoxious; the machinery was all working (I'm gonna see about changing that bottom bracket regularly; it feels like a new crankset).

We rode to Route 9, where Laura called for a water stop at a 7-11, and where I struck up a conversation with a guy who had made a bike trailer out of a push lawnmower and some other odd parts. 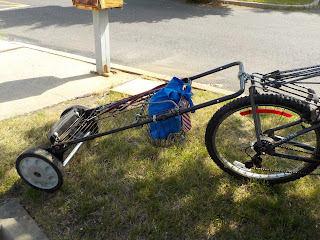 I thought it was an ingenious device, using parts he didn't have to pay much for and cobbled together to do what he needed. He's had some hard times (he didn't want to be photographed), but he's kept the trailer, and the attached bike, going with minimal expense. I was impressed.

On to Manasquan. We stopped at a cafe that featured coffee from a roastery we visit in Upper Black Eddy, of all things. 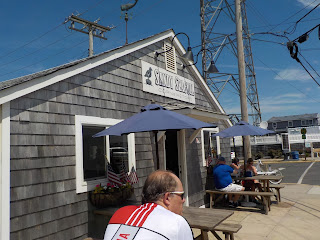 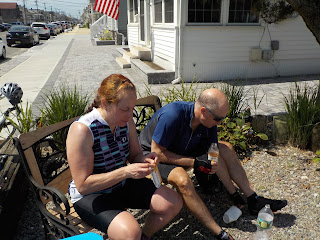 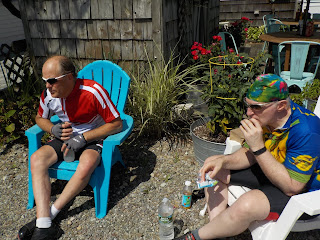 You can't see it here, but there's a prop trike in front of the door in the background. Either Tom or Laura got pictures of me on it, with the look of the eagle in my eye, as if I were pulling ahead of the peloton in my Category 11 race trial. (Edit June 27: It was Laura; see it in her post.) 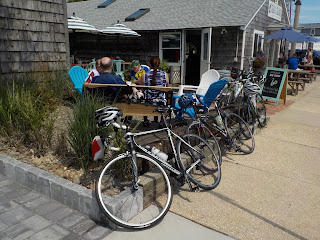 From there to the beach. 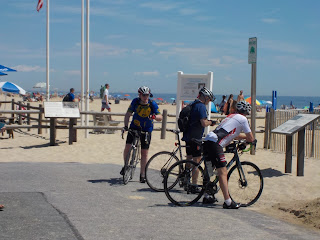 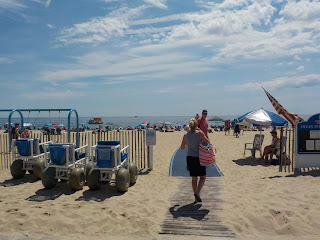 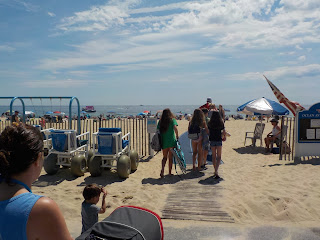 Laura had planned to ride down the beach walkway, but we were warned off; you can only ride from 6-9am, and we were way later than that. Well, that confused the GPS enough that it lost the route, and it took miles to find it again. But there was still gorgeousness. 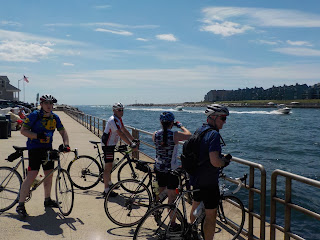 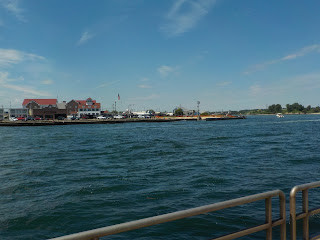 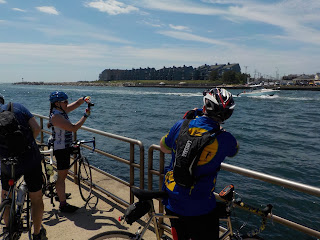 From there, of course, we came back a different route. The route was Laura's, with some of Tom's edits, and I think there might have been some on-the-fly navigation changes. I remember coming back at a good pace (is it possible there was a tailwind?)... and I remember doing the last six-or-so miles on 526, which was simple for the chronically lost (like me), but uninteresting.

70 miles. Just about right for me. It was a great day.

Afterwards, The Excellent Wife (TEW) and I went to Don's memorial service, where we met a number of Freewheelers in plainclothes (I only sort-of recognized some of them). It was a touching service. I'm glad we went.
Posted by Plain_Jim at 6:23 PM