Tom's listing for this ride read:

THE LYING BASTARD RIDE: This ride is back by unpopular demand. I have been accused of misrepresenting how hilly and hard my Lake Nockamixon ride is but this is truly FAKE NEWS. Yes, the terrain will be hilly to rolling with some (3500 ft) of climbing but will be a YUGELY scenic ride. So if doing something different on unfamiliar roads with a ride leader called a lying bastard doesn’t bother you then join me for fun ride.


I remembered this ride from previous years, and was one of those who accused Tom of being... uh, mendacious, when he described the hills on this ride. That said, I still planned to ride it. Tom calls us his "Insane Bike Posse", but I think we're just too dumb to learn from our mistakes.

It IS hugely scenic; the stop (which comes early, about 20 miles into this 51-mile ride) is great; and I like the people who come out. So yes, I got up early to get to Frenchtown for the start (with the weather that threatened yesterday, Tom moved the ride to today). Unfortunately, I had a bit of gastro-intestinal distress which would not be avoided on the way there; I stopped at a Wawa to enjoy their plumbing, and was almost late. Laura OLPH, whom I frequently point out is one of the last of us to arrive at ride starts (although she is almost always on time), crowed when I pulled in as she was already unloading her car. Most of the others were already there (Tom, Jack H, Ricky); Robert N rolled in just after me. 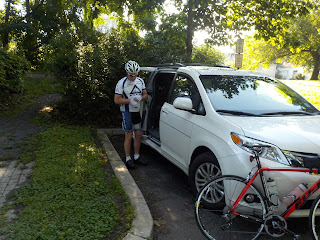 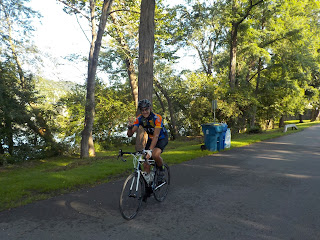 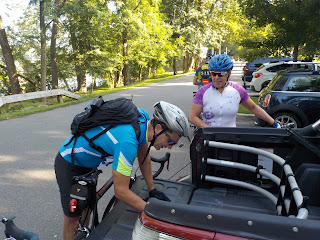 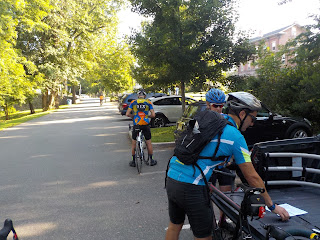 And off we went. Now, there are certain things you can expect on one of Tom's rides, as regular readers will know. One of them is a bridge out. Tom led us to a bridge that was supposedly out, which had concrete barriers for four-wheeled traffic (and weeds of a size that indicated the barriers have been in place for years), but also had openings that would easily admit pedestrians and bicycles. 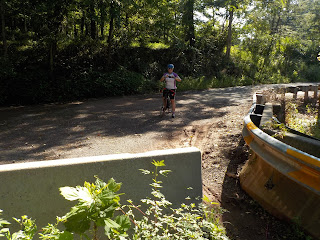 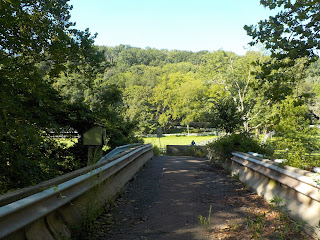 See those gaps? It's hardly worth dismounting, is it?

I didn't get pictures of the ride itself; I wasn't feeling 100% and I didn't want to hold up the group. But it was a glorious ride on a great day.

About 20 miles in, we stopped at this excellent stop, where they were all friendly (I'm a sucker for that). Even one of the customers asked if we wanted the big table (I didn't; I stand at rest stops; it helps me manage my worsening sciatica). 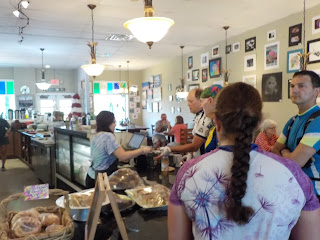 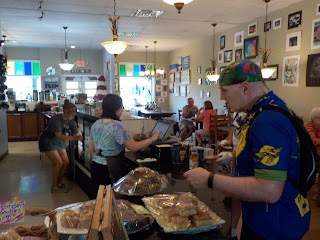 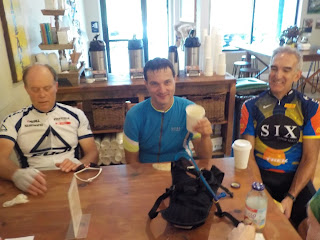 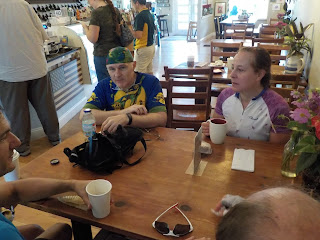 Tom promised us a brief stop at 40 miles if we needed it; I was pretty sure I would (I was right).

After that second stop, in an effort to save the traffic on a major thoroughfare, Tom took us down Quarry, which has a gravel surface. Tom said it looked OK on Google Maps. What I don't think he counted on was that in crosses Rapp Creek, which meant a downhill to the narrow bridge, then an uphill, both in  the gravel.

I couldn't do it. The wheels kept slipping. I'd gone over a few weeks ago in a gravel parking lot (then bruises are just clearing up), and it was just too scary. I walked the bike down and up: the second time I've done so this summer. 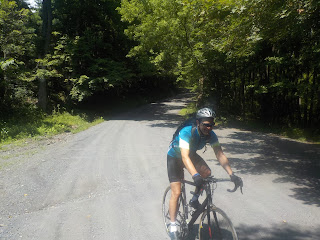 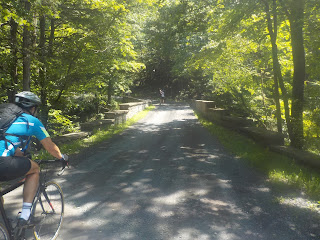 But you know what? I made it. I also made it through what Tom called the "Red Circle of Death", a section of Red Cliff Road that drops about 150' in about a half mile (Tom said it was steeper, but the ride page shows it's not).

After that, it was a quick ride back to Frenchtown... and for me, then, a leisurely drive to Lambertville to meet The Excellent Wife (TEW) for ice cream at O Wow Cow. She's taken a resentment that I get to Lambertville more often than she, that I go to O Wow Cow for ice cream when I do, and that I never fail to gloat over the fact that I got there and she didn't. So she insisted on meeting there today after the ride. Sometimes, the responsibilities of staying married are onerous indeed.
Posted by Plain_Jim at 5:39 PM