old guy bike adjustments, and 57 miles with a gang of hill slugs

A year ago, I had back pain bad enough that I gave it a name. It's returned; I've had trouble getting things off the floor, getting to the low shelf in the fridge, and getting myself off the floor. It's bad enough that I've actually been doing something about it besides complaining: I've added some yoga to my exercise routines (despite my distaste for the oh-so-aesthetic-looking men who do yoga; I've told my coworkers that I'm seeking a school of "yoga for grouches"); I've invested in a TENS unit (it's a device that sends an electrical charge across the afflicted area, and it's the best $30-or-so I've spent in a long time, let me tell you); I've got a lumbar support pillow on my main chair at home (the work chair is already pretty good).

The back pain was bad when I was getting off the bike after a few miles. I finally broke down and moved the saddle forward a few millimeters, and got a new stem that raises the handlebar and moves it back a bit. The changes are so minor that nobody will notice except me... but I now think of it as an old man's bike.

Still, the back pain is better.


Laura OLPH was thinking of doing a hilly, picturesque ride in Warren County, but the earlier-in-the-week email exchange among the Hill Slugs didn't elicit a lot of interest (Tom H was recently back from his adventures chasing the eclipse, and wasn't up for a demanding route, for example). I wouldn't be surprised if that ride shows up later in the season... but for today, she put in a 46-miler from Pennington (or 57 if you took her usual offer of extra miles, which I did).

I got to her house, and found my camera battery was in need of a charge, so I took no pictures on this ride. There will be a few from Laura.

Ricky G and Jack H also met at Laura's; Jack had parked at the advertised start, and ridden to Laura's so he could ride back, but he had an early commitment in the afternoon. We rode to the start at Twin Pines...

... to find eleven others waiting (Laura said the total was sixteen, but I kept counting fifteen at every stop). 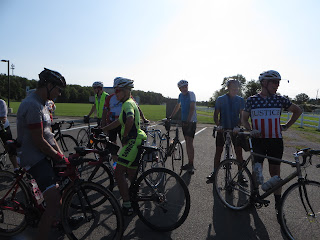 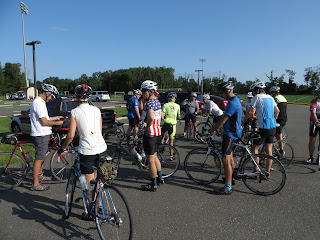 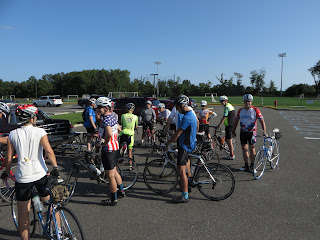 Wait... that guy in the flag jersey; what's he doing in these pictures?

It was a group that doesn't ride together often. Laura hinted at a sweep, and, of course, I stepped up. And off we went.

Rare for one of Laura's rides, we early split into a fast group and a slow group; the slow group weren't always slower riders, but in a group like this, where we don't all now one another's riding styles, sometimes it's smart to stay back and look for... well, let's call them eccentricities.

In the center of the second picture above, the rider in green is Cheryl, of the Florida Flatlander blog. She's a long-time Princeton Freewheeler who's moved to Florida (well, DUH!), but who's back for a visit. She was riding a new cyclocross bike with [28mm tires,] disk brakes, and electronic shifting (and I don't think she's got the hang of it yet... but it's a lovely thing). (Edited Aug 27 after comment from Cheryl)

I hung out in the back with the folks who wound up there. Jerry F (on the far right of the second picture) on his aluminum frame from when aluminum frames were the latest-and-greatest and I got to chat quite a bit.

Laura got us to Factory Fuel in Flemington. Laura knows I like bike pics, and took these of the hang-your-bike-by-the-saddle rack they have out front. 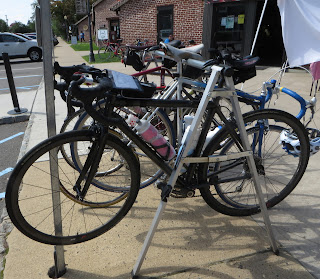 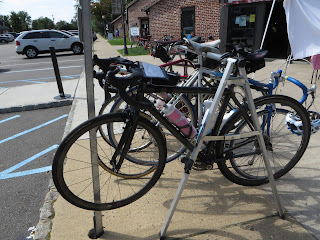 I like this style of rack where it works; the simplest ones are just five tubes. And I like Factory Fuel, although the rides in and out are traffic-y.

We mostly stayed together on the way back. Jack H and Blake went off the front for a bit, but they found us again later after a few extra miles; there were some apologies and bad jokes about it. Andrew and Celeste broke off to go home, having ridden the bikes to the start. But we didn't lose anybody off the back; the Hill Slugs have an ethic of "we don't go till we all go", and all the folks who stayed with us got back to Twin Pines.

Ricky, Laura, and I went back to Laura's where we had parked, and got to chatting, and we might be there yet if I hadn't decided that The Excellent Wife (TEW) was gonna be worried about me, so I went home.

And I hate to have to admit it, but the adjustments to the bike that I mentioned up top of this post seem to have made a difference. Rats. I'm an old guy.