I'm not going to post much about the ride I did on Saturday. It's hard to find much to say that won't hurt somebody, because I went on a B ride, and the average at the stop was 16.9mph, bangin' against the top of the B range for the club. When the leader saw what was going on, he held back the pace some (the rest of the group took off without him at least twice), but one of the riders was flagging all the way back. I rode with that rider (as did the leader much of the way), and even so, my final average was 16.4.

I wrote in early June about pace creep. I wish we could be more careful about this, and I wish there were an easy way to address it without raising dander and hurting feelings.

Today I got up to see a flurry of emails from Team Erudite, the group of Princeton profs who occasionally suffer me to ride with them. I thought I had a date with The Excellent Wife (TEW) today, so I begged off, and minutes later determined that the event we were to attend was actually scheduled for a week from today. Now, Team Erudite were gonna begin their discussions about an hour later, or I could leave RIGHT NOW and get to Allentown in time for Chris C's B ride... so I packed up the Prius and headed for Allentown, leaving behind my favorite gloves and sweatband. Luckily, I had backups in my big-bag-o'-bike-stuff.

Got to the municipal lot at Allentown to find Joe M, who led me the back way to the start at Jimmy Bruno's bike shop. Jimmy was out early, meetin' and greetin'. There are three rides that start there on Sundays: Sue M's C+ and Bob S's B+ (don't I wish I could be a B+ rider again!) in addition to Chris's B.

Chris had five: Joe and me, and Prem, and a woman Sue whom I'd never met. 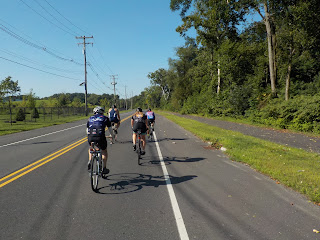 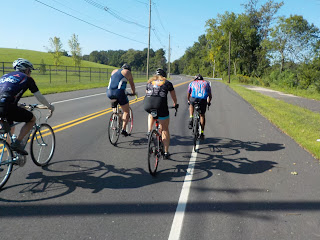 Chris decided to take us to the river, so we rode through Bordentown and Burlington, which Chris informs me (in his own inimitable fashion) are cities, not towns. Whatever; they're both lovely; there was money there once upon a time. In between, we went through the industrial section along the river. We also went through Roebling, which was cool.

We stopped at a Wawa on an island between the lanes of Route 130. 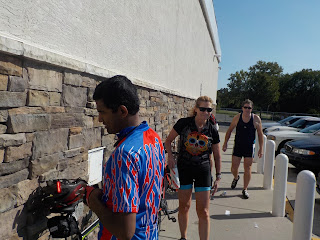 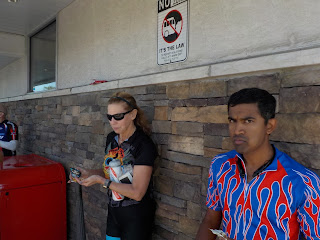 Above: I don't know what I did to Prem, but I'd better apologize, don't you think? 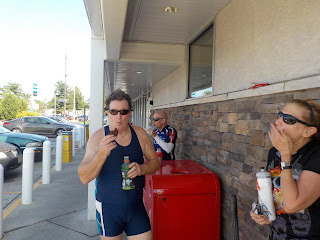 Obligatory bike pics. In the first, Chris runs his helmet straps through his wheel like a lock to slow down any would-be thief. 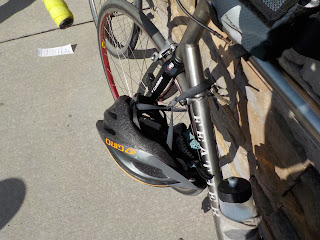 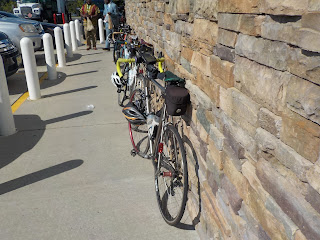 And back. Chris kept asking for distances, and chose routes, and we brought it in about 46 miles. I dropped in at Jimmy's shop and talked bikes for a couple (I gotta send more money there; I'm wasting too much of his time... maybe TEW needs some of his fudge?).

Then home to an impromptu date with TEW out to Doylestown to look at possible retirement homes. I'm not retiring for five years, and she's not for about ten, but you can't be too prepared, can you?