Well, I had planned to do Laura OLPH's ride from Lambertville to Black Eddy (where she was cued to go, no doubt, by the fact that the stop in Manasquan on last week's ride had coffee from her adopted roastery in Black Eddy).

But The Excellent Wife (TEW) pointed out that rain was supposed to start mid-morning (and she was outraged that I might be able to get to O Wow Cow again without her, an occurrence that, to her, ranks with the various invasions of Poland in offensiveness).

And then there was this flurry of emails from Snakehead and the group of professors I'm beginning to think of as Team Erudite, planning a ride locally (Snakehead is trying to reduce, or perhaps eliminate, his use of a car).

And then there was the announcement on Facebook that the Kim's rides were starting at 7am, and perhaps I'd avoid the young fast boys who had so unceremoniously cooked me the last time I went out with 'em. Team Erudite hinted they'd try to hook up with the Kim's ride...

...so at something-after-six this morning, I was running around, trying to get on the bike to get up to Kim's by 7:00. My garage pump decided not to work, so I ran to get the one in the car; I barely got through my pre-ride routine, and I had a number of other delays, some of which are best not discussed here (Hrmph!), and I left missing my helmet and had to go back to get it.

But there's a prevailing tailwind on Route 27 up into New Brunswick, and I got to Kim's at about 6:55 am to find... nobody. 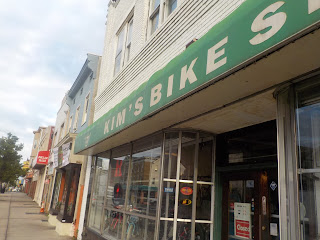 A minute or two later, Vicencio came by; he and some fast boys were going to ride some hills (he has a wicked video on Facebook going up Dead Lung, that I'm not gonna try to link), and he said Sr Francisco would be down shortly. Shortly, Francisco was down. 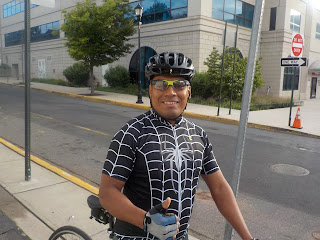 We waited and waited, but no other riders appeared; at about 7:15 we decided to go. As we started, Francisco asked if we wanted to add some miles to the usual route; I thought we could.

As wwe went through Johnson Park, though, we came upon Team Erudite: Dr Snakehead, Dr Eric G, Dr Yair R, Dr Robert S. They have a much better idea of the roads than I, so we decided to give them the responsibility of navigation, and we headed into the hills of Warren and Watchung.

There was one demanding hill, at Middlebrook to Washington Ave. While there were other hills, none were like that (and we were already at some elevation, so there was less climbing).

Below: consulting on routes. 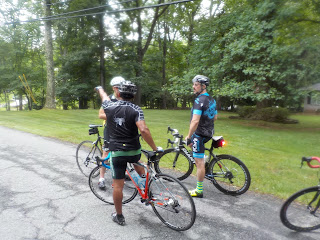 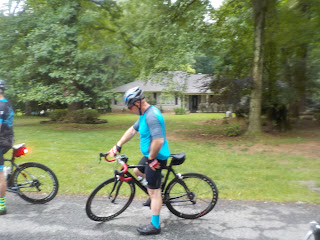 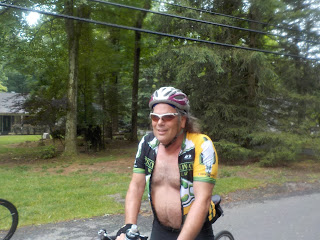 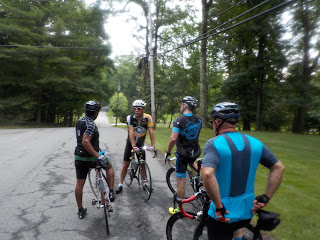 I'd ridden from home, as, I guess, had most of the others, so mileages will differ, but it was at about mile 30 for me that we started to differ on how to proceed back. We were trying to avoid the most heavily-traveled roads. We were riding between US 22 and NJ 28, when we took a turn into a "No Outlet". I know from the Hill Slugs that this has different meanings in different places... but in this case it meant a fence, no bridge, wet feet, and possibly poison ivy if we attempted to cross. Back we went. (I guess that doesn't only happen on Tom H rides for the Princeton Freewheelers.)

Before I knew it, we were at Possumtown Road, which is one of the alternate routes I take to work. We lost part of Team Erudite, so Yair, Francisco, and I decided to avoid River Road as much as possible on the way back; we went through the Heights neighborhood in Piscataway, and found a back way to Hoes Lane that I'm going to try to use on the occasional commute. Yair split off at Johnson Park, and Francisco and I went back to Kim's.

From there I went home at a funereal pace. I had planned on more like 35 miles than the 53 I wound up with. I hadn't had any breakfast, and the tailwind that was so helpful in the morning was now a headwind (well, that's what happens...). I watched my average drop as I slowly moped my way to Wawa. An apple fritter got me home.

And y'know that rain I was avoiding? It still hasn't come.
Posted by Plain_Jim at 4:04 PM