no progress on middlebush, & i get dropped by team erudite

After a change in my unit's weekend coverage responsibilities, I had to work yesterday so I didn't get a ride in. With the disappearance of the Cranbury "Back by Lunch" ride, I don't have a default ride for Sundays, so I responded to Snakehead's email polling Team Erudite (his collection of Rutgers professors who ride). We agreed to a start at Six Mile Run at 9:something this morning.

That's late for me, so I got out a bit earlier to investigate the construction on Middlebush: 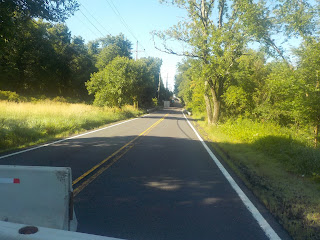 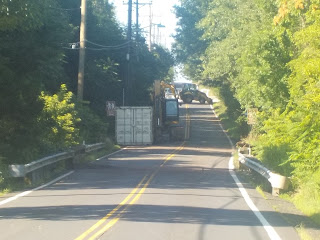 It doesn't look like anything's been started yet. This is supposed to be done by the time school starts... but a project at the "T" intersection, with one jughandle, at Centennial Avenue and River Road in Piscataway, near where I work, has been going on for two years. I'm not hopeful about this getting opened and closed in six or seven weeks.

On to Six Mile. I potted up to Millstone and back, in time to see Andrew, Rob, and Snakehead (all Rutgers prof's; the average education dropped considerably when I rolled up): 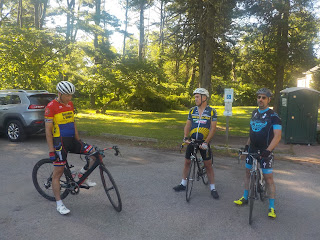 Off we went, starting with my usual Sunday route. We were rolling along at a good clip, in the high teens and low 20's; we picked up a rider on a single-speed who, to my surprise, kept up with our paceline for a bit.

But after about 12 miles with them; I'd had enough; I told Rob that I was going to fall back, and I saw them disappear over the hill heading for Pennington. I turned onto Princeton Road. (I got a text later; they wanted to make sure I was OK; apparently there was a missed communication. I responded I'd see 'em next time).

I did the rest of my usual route, and stopped at that Gennaro's, to which The Excellent Wife (TEW) has taken such a liking. While I sat outside, I tried to get a glam shot of the Yellow Maserati: 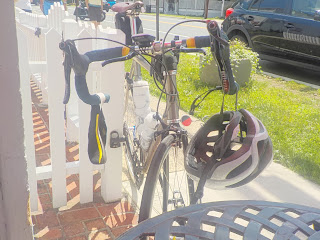 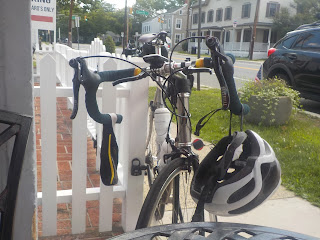 When I got home, TEW was all bursting with pride about her performance on the C (Edit: TEW reminds me, with some vehemence, that this ride is rated C plus!) ride in Allentown, and complaining about some fellow riders who'd pushed the pace and disappeared off the front (yes, there is such a thing as pace-pushing and pace creep). She also told me that she'd seen Laura OLPH on Chris C's ride there. I'm not givin' up on Team Erudite, but maybe Allentown is another possibility for Sunday rides. I gotta contact Chris and see what's what.
Posted by Plain_Jim at 4:57 PM