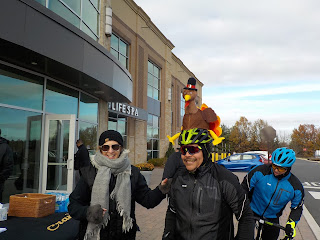 Don't you want to know a guy who will strap a turkey to his helmet and go ride a bike like that?

Today was the Princeton Cranksgiving ride; riders go around a route and stop at grocery stores, and buy stuff for local food kitchens. There's no cost to riders other than the food: the volunteers set a route, mark it, have people at the stores to take the groceries you buy (so you haven't gotta schlep them on a bike with no carrying capacity), and act grateful for something that we probably would have done anyway.

Except for the fact that it was so cold and windy, it's a great day.

The folks offer a 12- and a 22-mile route. I had hoped to start in Cranbury, adding about 15 miles to the 22-mile route... but cold weather and an upper respiratory infection (mostly gone, as I write this) suggested it would be smarter to just begin at the Cranksgiving start. (Steve S decided to take over the ride from, and back to, Cranbury, and had a taker. So there's that.)

We started at the Lifetime Fitness in Plainsboro/Princeton. I'm surprised they let the likes of me stand on their front stoop, the place is that upscale. 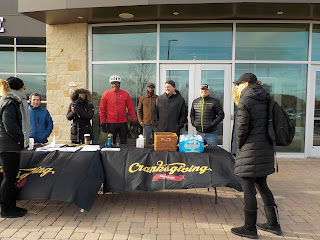 That's Vern H, above, in the red jacket. I haven't seen him in years; we caught up for a bit. 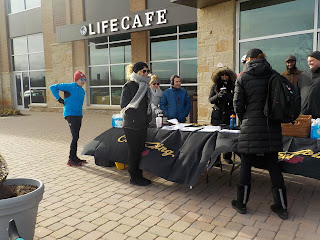 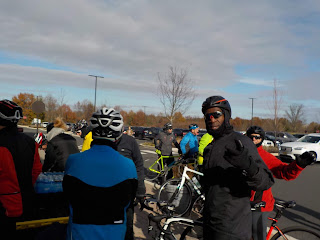 Above and below: Ralph and Joe. 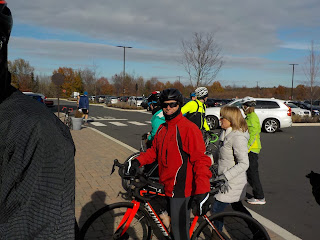 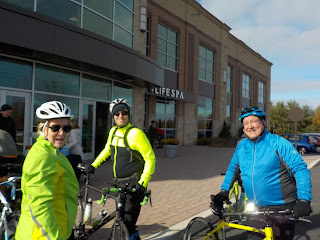 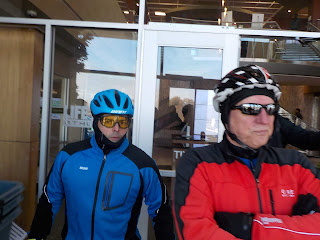 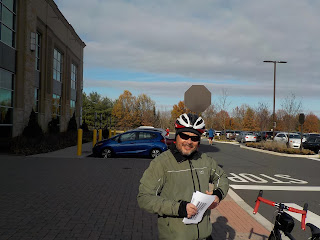 Above, Ron S, whom I haven't seen in years, either; I persuaded him (and Jackie, who was also along) to come out with us. There was also a Monica (of whom I don't think I got a picture), who allowed us to embattle her with persuasions about why she ought to join the Freewheelers.

We rode to McCaffrey's in West Windsor first, where I spent a smidge more money than I'd thought to, but got some groceries and toothbrushes. There's a certain amount of silliness among the riders, as well as some conspiratorial whispers about where to find stuff in an unfamiliar market, whenever we go out on this ride.

From there. to the Trader Joe's on Route 1. I'm sure I'd never find it again, but there IS a way to get to that store, without actually venturing onto Route 1. 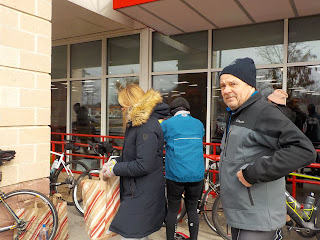 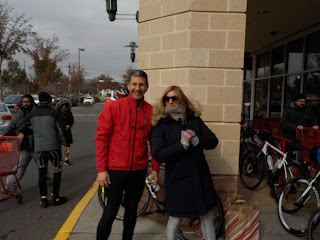 Above, ride volunteers. They seem so grateful to us... while they are the ones standing and shivering in the cold, waiting for us to drop off groceries! 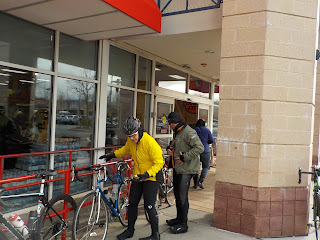 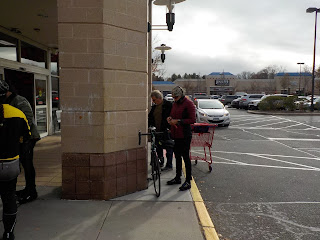 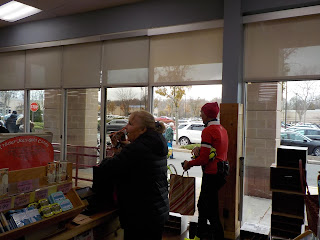 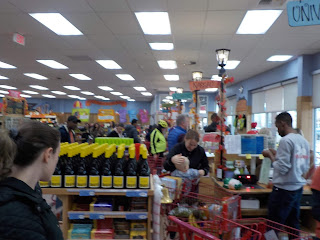 As we were departing the Trader Joe's, Monica broke a chain. She was about to call for a ride... but we got out tools and split off the broken link. Ron had an extra link, but I messed that up and couldn't fix it, so I had to cut that one out and use one of my own extra links. Monica was impressed that we were able to do such a roadside repair (and upset with the shop that had recently told her there was nothing wrong with the bike!). 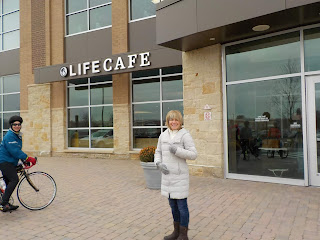 Above, Anna D', founder of the feast. Below, the team. 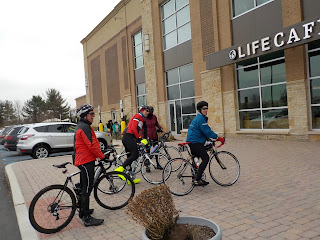 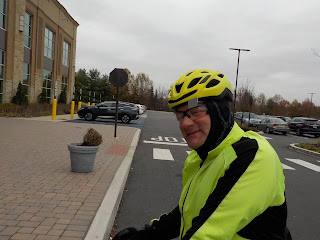 They DID let me into the Lifetime Fitness to wash the chain grease off my hands. So there's some magnanimity there. (But I still don't think I could afford any of their services!)

This goes almost every year. You oughta get out your woolies and come out next time!
Posted by Plain_Jim at 2:58 PM