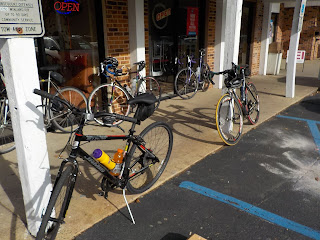 Tom H wasn't up for a B-paced ride this weekend, so he emailed a number of his Insane Bike Posse (most of us are also number among Laura OLPH's Hill Slugs, and the Usual Suspects who come along on my rides) suggesting we go on Tru Tran's C+ ride. A few of us changed plans to go along.

Because of my mother-in-law's condition, I was grateful for the invitation and the fellowship.

I got to the start early, and found Barry... 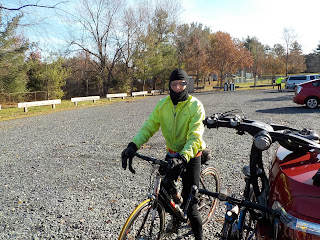 ...but I was extra early, and wanted to put a few miles in, partly because I'd made some adjustments and modifications to the Yellow Maserati (maybe I'll write about those in another post). When I got back, others had shown up to the start. 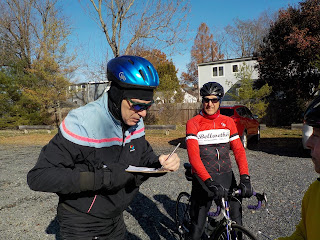 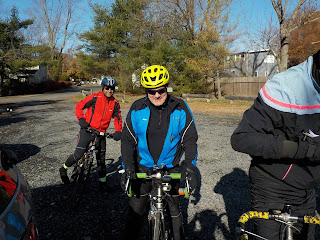 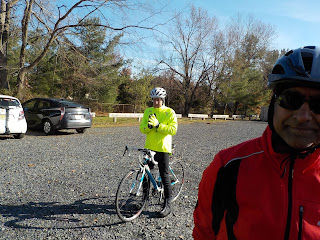 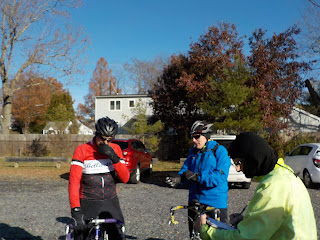 We hadn't gone a mile when one of us, fiddling with his bike GPS, ran int a car side mirror and went down. 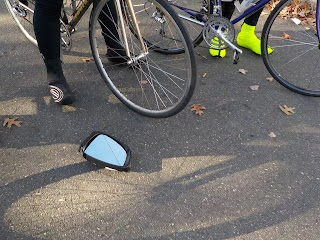 He wasn't badly hurt, but his front wheel may not recover (and nor, apparently, will the car's mirror). The driver of the car was very kind; they exchanged information, and the rider limped back to the start, while the rest of us continued. It was probably a bad start to that rider's winter.

On we went on a circuitous route from Cranbury to Princeton Junction. If you look at the ride page, you'll see that twenty-three miles in, we took a left onto Cranbury Neck Road, a point at which we could have arrived in about four miles if we'd ridden directly. (But, of course, these rides are hardly about riding directly. We would have lost out on the miles and the fellowship had we gone straight there!)

Shortly thereafter, I came up with a flat in the rear tire. When I examined the wheel, I found a piece of glass not quite big enough to be one of the projects that Laura is working on. I found it when it sliced shallow gashes in two of my fingertips as I examined the tire. (I have bandaids on those fingers as I'm typing this, and the usually-sluggish speed of my typing has now devolved to a glacial pace.)

I fixed the flat (with the gang looking on, but not insisting on helping, which is unusual for a FreeWheelers tire change), and we got going to the stop at the Dunkin Donuts in Princeton Junction. 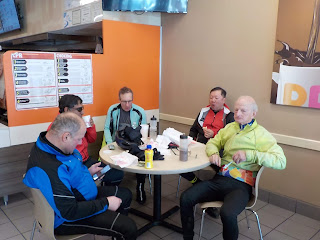 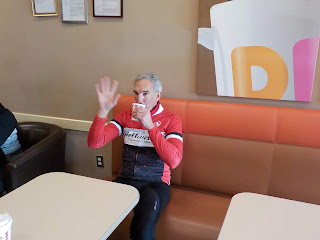 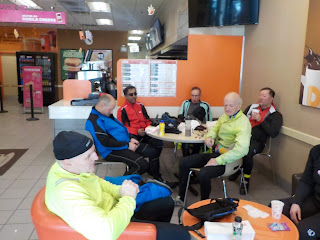 I got pictures of a few of the bikes (well, DUH!). 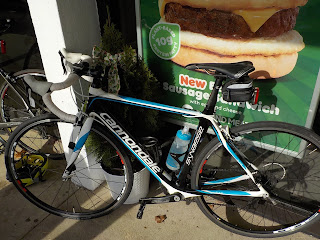 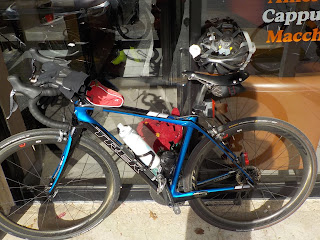 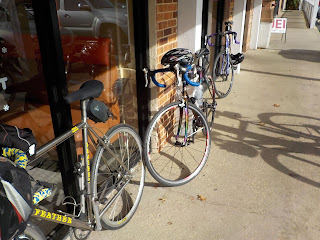 Below, Steve S's handlebar. I think he needs to carry more stuff. 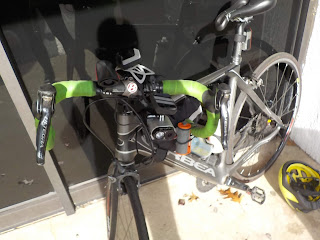 And back. On the way back, Steve S dropped ff the ride for a bit; it turned out he'd found something on the road he wanted to pick up.

Shortly thereafter, we got split; Tru was falling back to keep an eye on one of the riders. He'd bonked, and didn't want to go on. We loaded him up with Gatorade and got him to a location where he could be more easily found by the ride he was calling to pick him up.

After that, I said to Tom that I was definitely going to go on Tru's rides: everything that could have happened on one of Tru's rides, already had that day, so Tru would probably be the safest leader in the club from now on.

Tom, with a degree in engineering, said, "Statistics don't work like that."