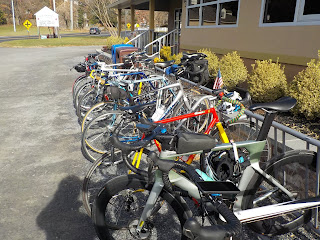 Regular readers may know that my excellent mother-in-law had a stroke a couple of weeks ago. Partly as a result of that, Thanksgiving was chaotic (to say the least), so when Laura OLPH posted a ride for today, I wanted to go, and The Excellent Wife (TEW) made it pretty clear that she was, at least, supportive. (She may have been grateful, in hopes that I'd get some of the crankiness out of my head.)

Laura didn't post a route, but said that she was planning to take a counter-clockwise route to Sergeantsville, which sounded good to me.

Now, "deosil" is an old Scots word that means to travel in the direction of the sun, or clockwise in the northern hemisphere; the opposite is "widdershins", so we were taking a widdershins route. There was an old Northern English and Scots tradition that walking around a church widdershins was at least unlucky, and might actually call up the Devil himself.

But that was not our experience today, except at one point in a minor way.

Ricky and I met Len outside Laura's to get in a few extra miles. 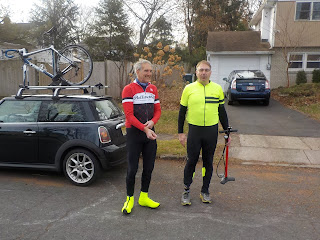 And then we headed over to the Pig, where we met the rest of the crew: Racer Pete, John K, Chris C, Peter G, and Ron, riding yet another in his stable of beautiful old bikes, this one a Raleigh from the 80's with Campagnolo components.

Off we went. Now, this direction is the opposite of the one we usually use to get to Sergeantsville, and it's better in almost every way. First of all, it seems like the hills are gentler than in the other direction. And secondly, we spent a few miles on Yard Road, between 579 and Sandbrook Headquarters Road. Yard Road is one lane, mostly; passing farms and small houses. I thought it was beautiful, and if the group had been willing to stop, I'd have yonks of pictures (if we go when the weather is nicer, perhaps I will, but it was cold today). Laura, consider this a hint: I like Yard Road. It's not that River Road we do by the railroad tracks up north, which is one of my favorites; it's not Alexsauken Creek Road, which I think of as fifteen minutes of vacation, but it's pretty and I won't complain if we go back.

Now if you go to Sergeantsville, you probably stop at the general store... but there's a place with bagels that Laura likes next to the Delaware Township Fire Department. It's named Bagel Barn, and it was worth foregoing the general store. 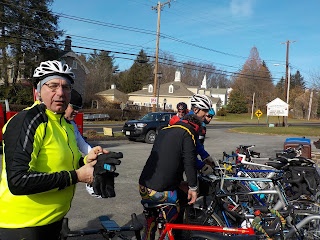 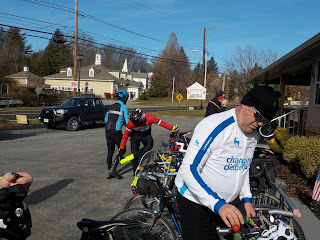 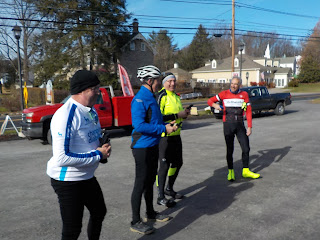 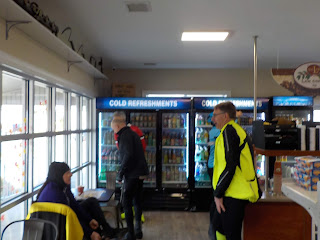 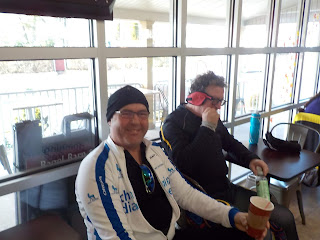 I got the picture of John, above, and he insisted I take another with the diabetes logo on his jersey legible. Herewith: 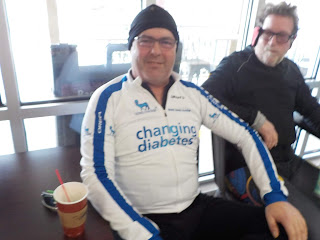 I got a couple of pictures of Ron's gorgeous Raleigh, but they don't do it justice: 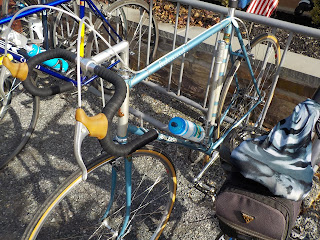 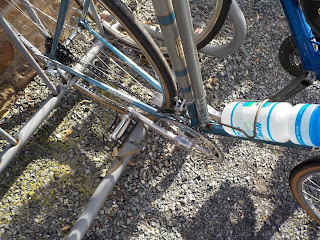 And back. By this time, the weather had warmed up a bit. We came down Sandy Ridge-Mt Airy, then climbed up to the farm at Mt Airy, then down again and up to Rock Road.

When we turned onto 579, the bad luck of widdershins caught up to us: about every car in the county was out for Thanksgiving Saturday. With no shoulder and oncoming traffic, the cars did what they could to get around us, some with better humor than others. It seemed we were on that road for hours; I was grateful when we turned onto 623.

And back after that. We returned to the Pig, where a few of us had coffee and junk before heading out. 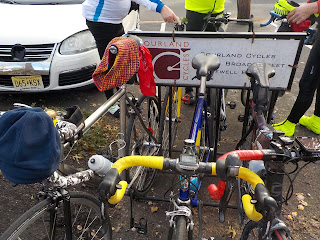 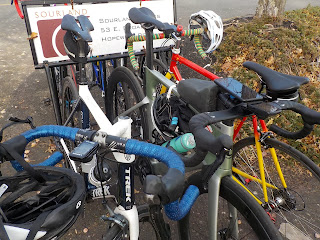 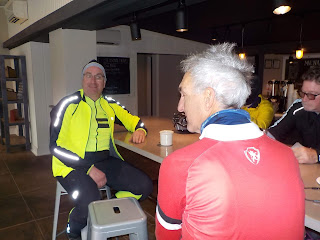 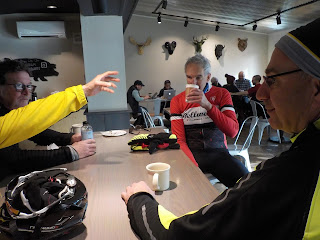 Re: that last picture: Laura didn't want pictures of her unless she was on the bike. That's her arm encroaching from the left. Perhaps she is rethinking her decision.

It looks like rain for tomorrow, so probably mostly chores and maybe some bike maintenance (I got a new Selle Anatomica R2 saddle, which I don't think I like; I'll probably swap it back out for the older one, among other things). So while Thanksgiving itself was difficult, I'm grateful I got this ride in today.
Posted by Plain_Jim at 5:18 PM