cant get my act together

So I'm not as anxious as I was yesterday... but I just could not get my act together this morning. Instead of getting up at 4, as is my custom, I slept in until 5:30, then fooled around on the computer, then got talking to The Excellent Wife (TEW) until past 6:30, and by that point I was not gonna get it together to ride to the start of my ride at Six Mile/Blackwells Mills, so I threw some stuff in the car and went to the bagel place, which was hoppin'! with customers. I wasn't sure I'd get served and out in time, so I went to another bagel place across the street. It was empty, so I ordered there.

It turns out that it was rightfully empty; they are no longer making bagels on-premises, and the one I got, while not quite stale, was not quite fresh, either, and clumped with butter to the point that some of the clumps fell out of the bagel and bounced off my lap. I didn't have time to finish my bagel and the coffee by the time I got to the ride start...

...where there were just YONKS of riders waiting; I had EIGHT to start! 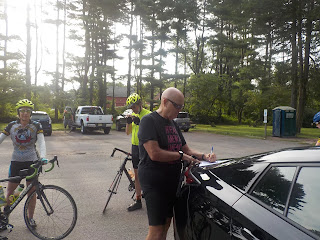 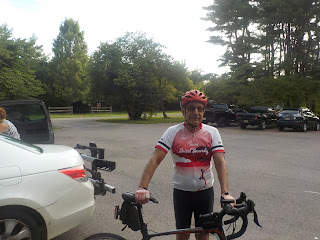 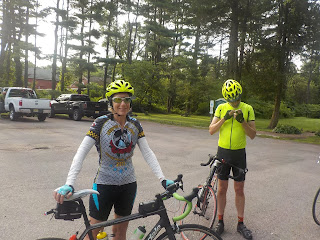 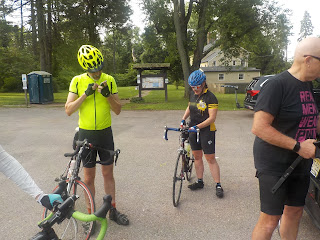 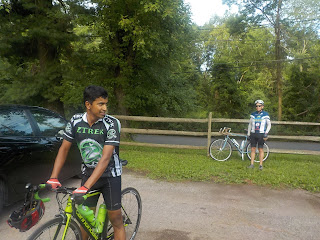 Well I sure can't keep track of that many, especially in my current state of psychological decompensation, so I hired Dr Lynn to sweep, and off we went.

We weren't far long when somebody noticed that I had the new, completely transparent water bottles in my cages; in fact, you couldn't even tell they were there! They weren't. They were still in the car, safe from theft and road wear. I could NOT get it together today.

We were much faster on the first half of the ride than I expected. The route I use usually goes into Hillsborough from Blackwells Mills, and there are some annoying, if not really demanding, hills near the beginning, and there is the climb on East Mountain. But Joe tells me we were at about 15.9mph before the break.

I usually tell folks they can sprint ahead on East Mountain; we go from one end to the other. Some take me up on it, some don't. I ride at a pace that's comfortable for me. The folks in front can drop in at Carrier and lead some group therapy, or get a pizza delivered, or something. Last time, I was bringing up the rear alone; this time, a few of the more compassionate took pity and kept me company.

Then down through Montgomery to the stop at The Usual Bagel Place. 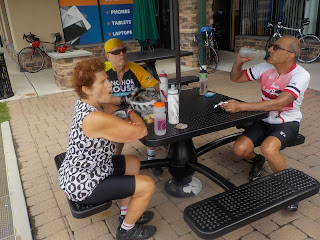 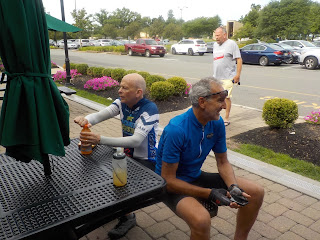 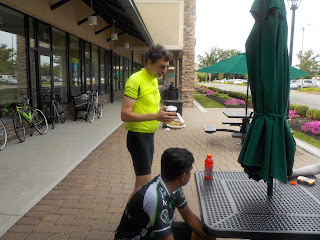 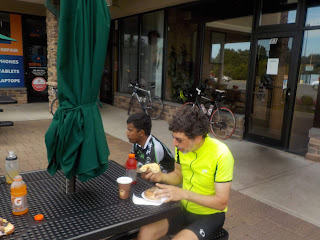 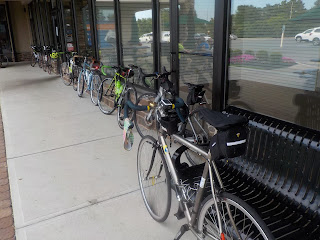 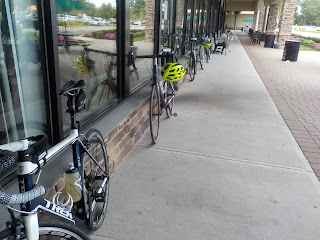 Heading out after the stop, on River Road, one of the riders missed a shift, locked up the bike, and went over, winding up with some minor lacerations and some feelin' dumb; he said himself it was a rookie's mistake. At about the same time, another rider noticed that the box on his front derailleur was broken and wouldn't shift. I'm lookin' for somebody to blame this stuff on (you can see yesterday's post about that, too...).

And, channeling Tom H, we went up Faculty Road, which was closed except for the sidewalk. 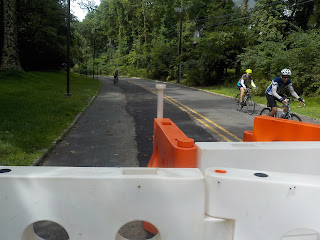 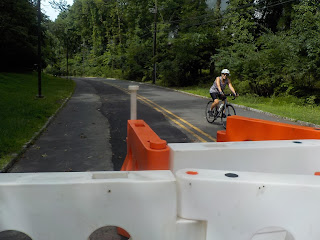 Laura had already turned off to go home, and Andrew did as we went through Princeton (we went within a block or two of his house, and, since he'd ridden from home, he'd pretty much done the whole route anyway). We'd been proceeding at a regal pace after the stop, and were at about 14.7 average when we started up Laurel and Canal Road toward the end, but we made up the pace at that point, and wound up with ride data that looks like this. So it's a low B, sometimes lookin' like a high C+ ride, which is about where I usually come in.

This is my seventh lead for the year; I'm in for a jersey this year, maybe. Two more, and then the fall picnic ride. Maybe I can do it...
Posted by Plain_Jim at 2:31 PM