back to thomas sweet 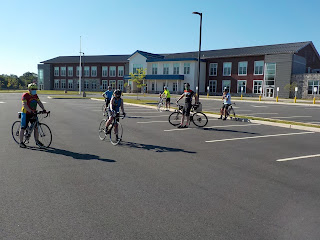 When I went to bed last night, I had five signed up for my ride; when I got up today, I had ten.


I've started this "alternate start location" that seems to be working. While most of my riders start at the school, some choose to pick up the ride farther along... and, since many ride in, they also drop off when it's convenient. I find it works for me and for them.

One of my signers-up sent word he'd not be there, another had let me know he'd pick us up "somewhere". So we started with eight: usual suspects Andrew A, Martin G, Laura OLPH, and Bob N (and me, of course), and new-to-me Alan M, Chris K, and Ed W.

We did a modification of one of my usual routes, stopping at the newly-reopened Thomas Sweet in Montgomery (open for take-out, no toilets available). Still, I want them to survive, so I felt a responsibility to support 'em. A few of my riders indulged me.

Before the stop, Ed begged off, saying it was a great day and he wanted to get in more miles than we were doing (and likely faster than we were doing them). I also had to stop; The Excellent Wife (TEW) had had some drama at the local Pep Boys, and the beep of a text indicated there was some news (it turned out to be a happy conclusion).

When we got to Thomas Sweet, Dave H was there. 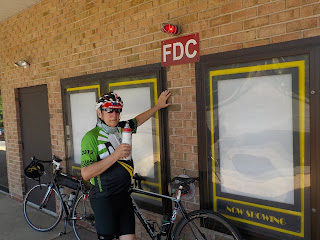 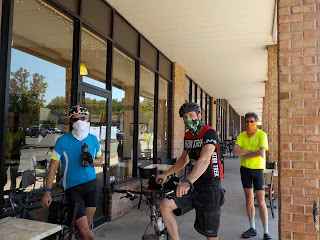 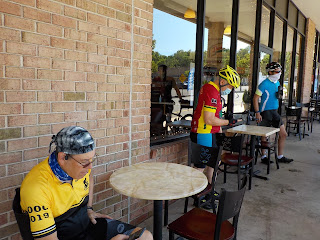 Chris K, in the Star Trek jersey above, chatted about his wife's wanting a trike; evidently she's had trouble on  two-wheel bikes and IS NOT INTERESTED in trying again. I can't blame her; I have similar-but-different topics on which I have firmly-held opinions that I am not interested in going back and revisiting.

After the break, Bob N had a flat (at the same location where Ken G had had one a few weeks ago - hmmm...), and bade us go on; then another two riders had a minor collision, but the only injury seemed to be that a brifter was knocked out of alignment, and a touch with a #4 Allen wrench soon saw to that (yes, I do carry a number of Allen wrenches, in addition to a multi-tool, and a few tubes, and a pump, and CO2 cartridges, and tire boots...). Laura had gone off; soon Dave did, too. The rest of us brought it back to the Claremont school.