steve's ride was just the thing 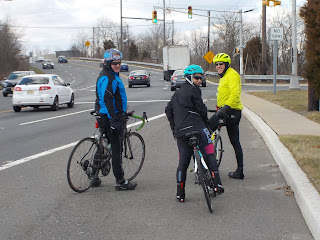 I wanted to get a group ride in today. I knew if I went out on my own, I'd probably do about 25 miles and be back, which isn't bad, but it isn't really enough. Neither Laura OLPH nor Tom H listed a ride for today. In fact, the only rides listed were the one for the B+ fastboys (oh, heck, no!), Prem's B ride (averaging 16+mph -- maybe in June or July, but not in February; my legs haven't gotten into summer shape yet)... and a C+ ride posted by Steve S.

Now, I normally ride at B pace, and it felt like a concession to drop  level. But, truth to tell, most of the rides I lead come in at a high C+ pace anyway. And I was specifically avoiding a B ride that I felt like was going to be too fast.

So who am I trying to kid?

So i showed up early for Steve's ride, and who was there but Chris C, also normally a B rider. Well, that made me feel better.

There was also Madhu A, who came along on my ride last weekend, Barry Y, and a couple of riders I didn't know, Pete and Bill.

Steve had posted his route, so I knew that the ride would go along some roads that we usually avoid due to traffic... but they were fine today. What was memorable, though, was the headwind. Laura OLPH says that riding into a headwind is good training for riding into headwinds (implying it's not much good for anything else), and we got a bit of that training today. A couple of riders turned back early after deciding that this was a bit more than they could handle.

The rest of us went on. We went along Sloan Ave, close enough to the Grounds for Sculpture to see these guys: 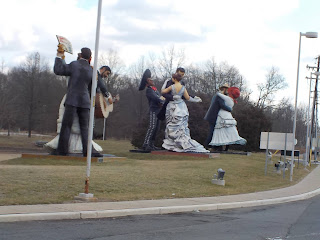 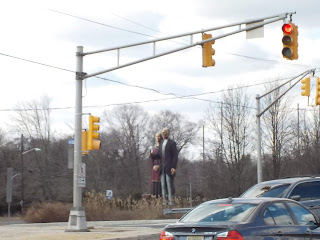 There's stuff I love about NJ.

On to the stop at the Whole Earth Market. I know this as a health-food grocery, but they had food enough to make a stop. A couple of us had real food, but I engaged in my usual empty calories. Coffee wasn't obviously available, but there were some perfectly good Espresso Chocolate Chip cookies that gave me sustenance to get home on. 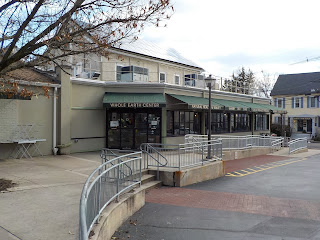 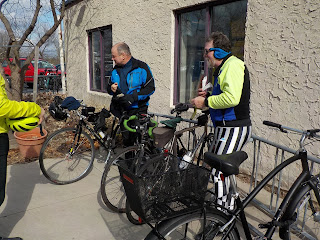 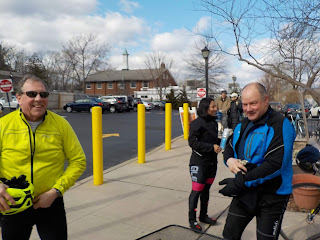 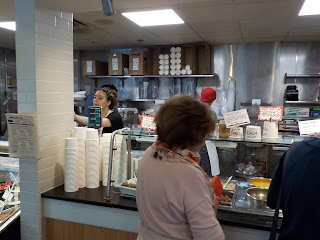 And back. We went through the Sarnoff compound, and then straight up through Plainsboro back to the Cranbury Village Park start. I made a pilgrimage stop at the repair station. 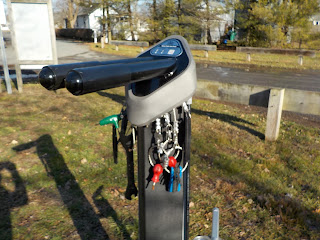 It's good enough that you can actually do useful work there!

I'm leadin' tomorrow. It'll probably be about the same pace, although a smidge longer. Y'wanna com out?
Posted by Plain_Jim at 4:00 PM