the redcoats are coming 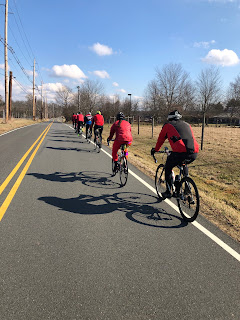 (Pic above, and another below, courtesy of Prem R, because the battery in my camera didn't want to get out of bed in this cold.)

It was a dumb decision today to plan a ride to the Pig, that closes at noon on Sundays, and set the start for 10am from Blackwells Mills/Six Mile. It meant I had to start promptly and keep a quicker pace than I like.

One of my pre-registrants, Ralph S, got lost on the way to the start. Normally I would have waited... but I just didn't have the time today. So off we went at about 10:05.

We were nine, all but one of whom had pre-registered: Andrew A, Ricky G, Peter G, Jack H, Dave H, Laura L, Prem R (who came to my rescue for photographic duty)... and Darren K, who isn't a member. I was all set to butter him up about the joys and privileges of PFW membership... but it turns out he lives in Maryland, was here for a family birthday celebration, and found us through a web search fro group rides. So, before departure, I made sure to give the whole safety speech, and tried to act friendly anyway (it's not a behavior that comes naturally to me).

He sure could ride well enough. He mentioned that the tidewater area of Maryland where he lives now is flat; it's sparely-enough populated that they don't even have much in the way of highway overpasses. So when we came to a bit of a hill on Sunset Road, he asked what THAT was supposed to be! And then he gave us all a lesson in the expeditious traverse of an annoying little hill.

We did my usual route down to the Pig at a pretty good clip (I didn't know I had it in me). The offerings were a bit disappointing; they'd been mostly cleaned out by the morning crowd. (Pics from my phone.) 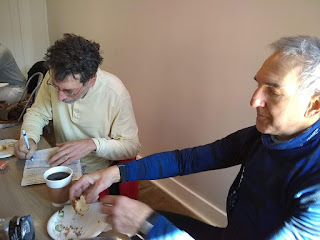 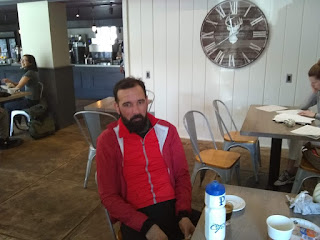 Above, Darren K, after schooling me on how to climb hills.

We went outside after, and who did we see but Ralph S! 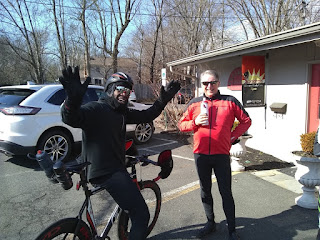 He'd passed us in his car on the road, and had followed the route to get to the Pig.

(On a fixed gear. On some hilly roads. Sheesh!)

He joined us for the rest of the ride. We went back up Cold Soil, Carter, and Pretty Brook, and then into Princeton. I'd gotten a suggestion from one of my Usual Suspects that coming up 27 to Kingston might be as good as, or better than my usual real-estate tour of neighborhoods that I use to avoid heavily-trafficked roads, so this time I took the group up Nassau Street through downtown Princeton, and up to Kingston to turn on Laurel to go back to the start.

I asked for feedback, and the sense of the meeting was that we should NOT take the group through downtown Princeton. In future, I'll probably take the back way. I might zag over to 27 at Harrison Street or above, but not below that again.

Oh, and as for the title of this post? Get a load of this: 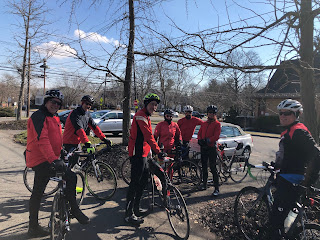 We musta looked like we were in uniform. (Another pic thanks to Prem R.)

And thanks to Madhu A, who came out early on to say hi and wish us luck. She had been on yesterday's ride, and saw I was leading today. I hope she can come along again in the future. Do you suppose it's time to start C+ rides at the end of the month again? Maybe I'll plan one for Feb 23, or as soon as possible after.
Posted by Plain_Jim at 5:20 PM