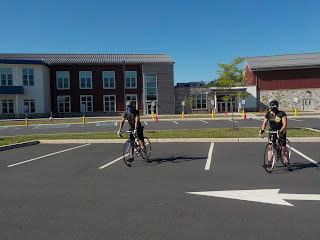 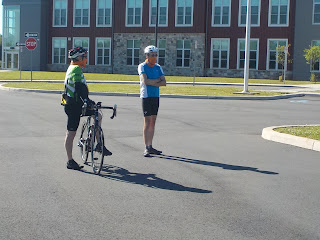 At the stop at the park on Camp Meeting Road: 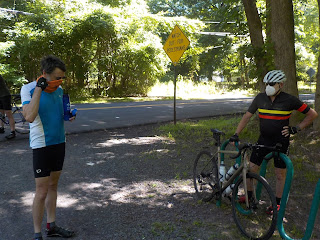 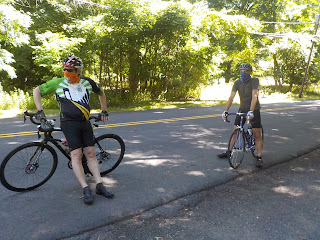 My usual suspects have gotten a little more used to riding under coronavirus rules; there appears to have been more care taken, both with rules and with consideration of different people's understandings of the risks and best practices. It might have helped that there were only five riders today, and all are known to each other.

We left from that Claremont School again (there is a porta-potty in the back, although I don't know how long it will be there). We passed the parking lot at Six Mile Run... which was PACKED, as was the first overflow lot on Blackwells Mills Road; I couldn't see far enough to see the one at the other end. I'm conflicted about starting rides at the Six Mile Run lot.

We did a short (for us), reasonably flat route (the linked page includes my rides to and from home), at the usual Plain Jim low B pace (which is really a high C+ pace, but none of my Usual Suspects have complained). I'm trying to keep routes long enough to be interesting, but short enough so that people are carrying enough food and water, and so that the dearth of toilet facilities doesn't pose a problem. The park at Camp Meeting Road has had the porta-potty removed.

Ken G got a flat in his tubeless tire, with spraying compound and hissing air escaping. It was a dramatic flat, and it was about the only drama of the day. Ken sent us on and said he'd deal with the flat himself, and in a later call stated he'd arrived home.

And that was the most dramatic thing that happened today. It's almost enough to make things seem normal.
Posted by Plain_Jim at 8:13 PM